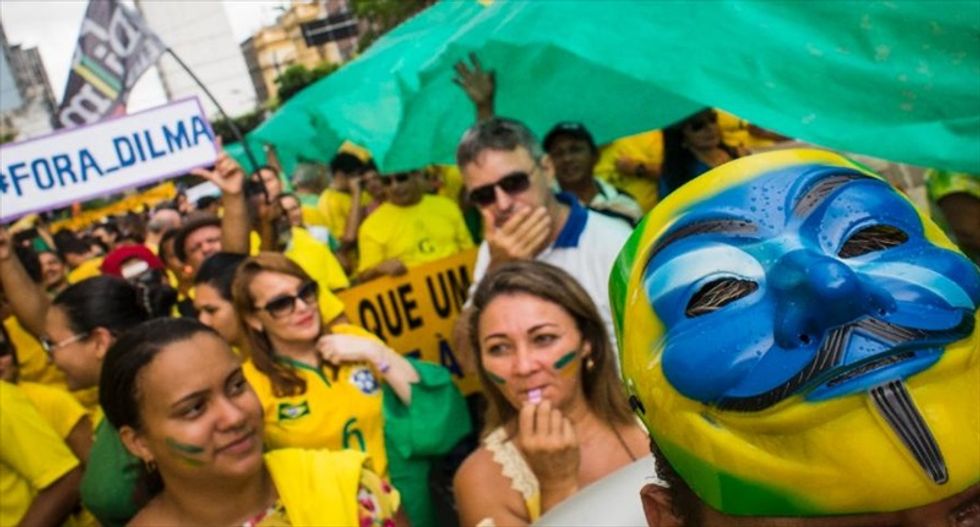 Demonstrators protest against the government of Brazilian President Dilma Rousseff in Manaus on March 15, 2015. Photo by Raphael Alves for Agence France-Presse.

Brazilian President Dilma Rousseff pledged Monday to hold talks with her growing number of critics and said her embattled government needed to show humility, a day after massive protests erupted across the country.

Rousseff was narrowly re-elected less than six months ago in a bitterly fought runoff but is already facing pressure to quit over a snowballing $3.8 billion graft scandal at state oil firm Petrobras which has dragged in her ruling coalition and seen calls for her to be impeached.

Her mounting woes include a badly faltering economy and on Sunday protests against her took place in major towns and cities across Brazil, laying bare the scale of public discontent.

Rousseff suffered a fresh blow Monday when a senior member of her ruling Workers' Party (PT) became one of the most high-profile public figures accused of corruption in the murky Petrobras graft case, which stretched back to a period when Rousseff chaired the company board.

In a closely watched speech in Brasilia, Rousseff said her underpressure government had to open "dialogue" with society.

She urged the country to unite and told parties across the political spectrum to pay attention to the rising anger on the streets, including agreeing a package of "wide-ranging political reform" which she intends to unveil in the crucial next few days.

Rousseff, a former guerrilla leader imprisoned and tortured under the 1964-1985 military dictatorship, added she was "committed to governing for 200 million Brazilians -- those who voted for me and those who did not."

Referring to the protest marches that drew more than a million onto the streets, she said: "Yesterday, when I saw hundreds of thousands of civilians demonstrating I could not help but think how it had been worth fighting for this freedom (from dictatorship)."

Separately, the public prosecutor in the southern city of Curitiba charged Joao Vaccari, the PT treasurer, in the Petrobras case.

Prosecutor Deltan Dallagnol said testimony collated by investigators appeared to show Vaccari "urged payment of a portion of bribes in the form of electoral donations" to the PT.

The graft scheme at Petrobras -- a firm once a source of pride for many Brazilians -- allegedly comprised a 10-year program of kickbacks and political payoffs that siphoned off $3.8 billion from Petrobras via inflated contracts.

Rousseff chaired the Petrobras board during much of the alleged corruption period.

She is not being investigated, but leaders of her ruling coalition have been named in an ever-widening probe.

They include Senate president Renan Calheiros and Speaker of the Chamber of Deputies Eduardo Cunha, key figures in the centrist Brazilian Democratic Movement Party, or PMDB, a vital component of Rousseff's ruling coalition.

So far, 13 senators, 22 deputies and two governors have been placed under investigation in an affair which has enraged the public.

That, coupled with an economy which spent much of last year in recession and claims of impunity and corruption at the highest levels of office triggered Sunday's peaceful and colorful protests.

They followed a first wave in June 2013 which saw similar large numbers of disgruntled civilians demonstrate over transport fare hikes and the spending of billions of dollars on last year's World Cup and next year's Rio Olympics.

But whereas the 2013 demonstrations targeted the political class in general, Sunday's marches primarily took aim at Rousseff.

Some anti-Rousseff campaigners want the president impeached, but most observers see that as unlikely even if "people are very frustrated with the electoral process, all the corruption and deterioration of the economy," said Michael Mohallem, professor of political science at the Getulio Vargas Foundation in Rio.

Rousseff has proposed anti-graft reforms that include a ban on companies providing political campaign finance, a system open to abuse.

As Rousseff looks to ride out the storm, more protests are slated for April 12.

Former president Luiz Inacio Lula da Silva's press secretary Ricardo Kotscho said that "clearly today a political cycle is coming to an end in Brazil. The Dilma government has run out of ammunition and no longer knows what to do to calm the masses."