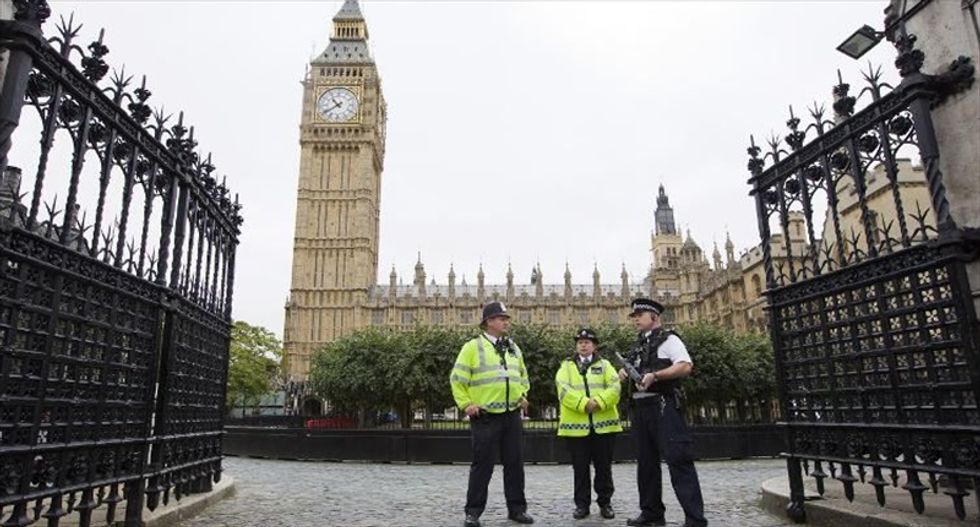 Police officers stand guard outside the Houses of Parliament in central London on Sept. 26, 2014 [AFP]

Allegations that London's police force covered up the involvement of British politicians and police officers in a pedophile ring are to be investigated by an official watchdog.

The 14 claims dating from 1970 to 2005 are related to "high-level corruption of the most serious nature," the Independent Police Complaints Commission (IPCC) said.

They include an allegation that an unnamed politician demanded of a senior policeman that no action be taken over an alleged pedophile ring for members of parliament (MPs) in the 1970s.

Another claim states that a Houses of Parliament document found at the home of a pedophile listed MPs and senior police officers as members of a child sex abuse ring but no action was taken.

Rumors of a historic pedophile ring centered on parliament have swirled for years, but nothing has ever been proved.

An official investigation last year found no evidence that the Home Office interior ministry had covered up the disappearance of 114 files relating to child abuse in the 1980s.

This included a dossier alleging abuse by top public figures which was sent to ministers by a late Conservative lawmaker, Geoffrey Dickens.

The IPCC is taking over an internal investigation which was already being conducted by London's Metropolitan Police after the force handed it on to them.

"The MPS (Metropolitan Police Service) recognized the severity of the allegations and the importance of understanding whether or not our officers had in the past acted inappropriately and therefore voluntarily referred the ... allegations to the IPCC," it said in a statement.

Meanwhile a BBC investigation claimed an undercover police operation that had gathered compelling evidence of child abuse by a prominent MP and a member of Britain's intelligence agencies was quietly ditched shortly after officers moved in to make arrests.

Police officers brought in the Liberal MP Cyril Smith during an inquiry in the early 1980s which targeted properties in south London suspected of hosting sex parties involving teenage boys, but he was released within hours of being taken to a police station, the television report claimed.

Detectives were then ordered to hand over their evidence and warned to keep quiet about the probe or face prosecution under the Official Secrets Act.

The information was passed to the program by a former officer familiar with the original investigation and its closure.

The police operation believed that boys from care homes were being provided "to order" for sex parties.

Evidence included photographs and video taken from inside a flat with a hidden camera.