Columnist: 'Race Together' backlash shows blacks are racists who just want to take stuff from 'whitey' 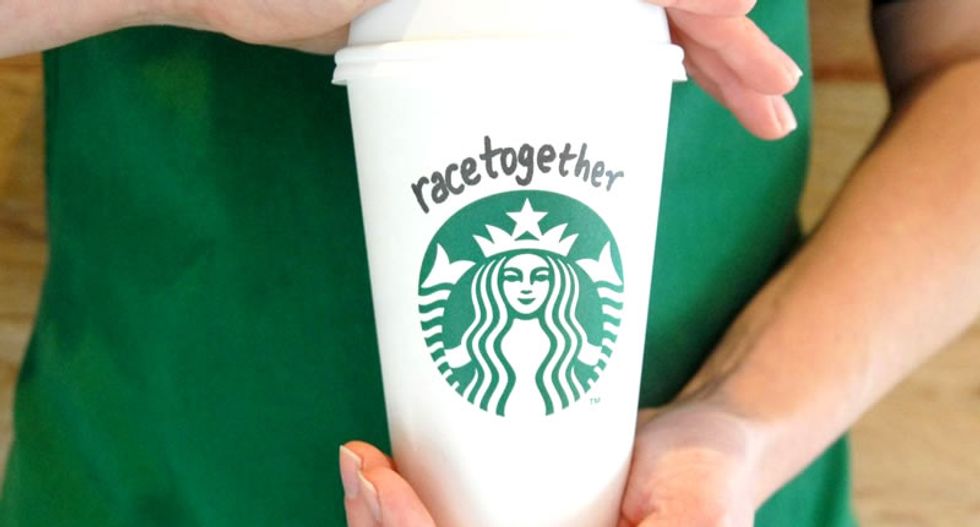 Jesse Lee Peterson, the controversial leader of The Brotherhood Organization for a New Destiny -- a religious group dedicated to fostering a conservative movement within the African-American community -- published a scathing essay at World Net Daily in which he blamed "black racists" for the demise of Starbucks' "Race Together" campaign.

Starbucks CEO Howard Schultz insisted that "our objective from the very start of this effort...was to stimulate conversation, empathy and compassion toward one another, and then to broaden that dialogue beyond just our Starbucks family to the greater American public by using our scale for good."

He did, however, confess that he may have put his employees on the spot, telling Rolling Stone that "while there has been criticism of the initiative – and I know this hasn’t been easy for any of you – let me assure you that we didn’t expect universal praise."

Much of that criticism has come from the African-American community, as epitomized by this tweet from April Reign:

According to Jesse Lee Peterson -- who included Reign's tweet in his catalog of angry black complaints -- sentiments like hers are just more evidence that "most black Americans are not interested in coming together to heal ongoing race issues. They would rather hate and take from 'the oppressor' (white folks)."

"When black liberals say they want to have a 'conversation' about race, what they really mean is they want to continue blaming whitey for past racism and perceived 'white privilege,'" he continued.

Peterson argued that "black racists" opposed the Starbucks campaign because they prefer "to squelch white people's conversations, thereby creating frustration and anger in whites. Then they point out how racist whites still are...as a pretext to further control them and take more of their stuff."

"Starbucks wants to encourage more discussions on race -- great!" he said. "Let’s really have those conversations! We can start by discussing how angry blacks have set race relations back 150 years!"

"White Americans have examined themselves and, for the most part, they have dropped the racism in their hearts and have overcome," Peterson continued. "They’ve moved beyond judging people based on color and are gauging character instead. Instances of whites attacking blacks are so rare that blacks have to manufacture them. But black-on-white violence is commonplace, though well-hidden by the media and black 'leaders.'"

He concluded by saying that black Americans will "never be satisfied no matter how much white America appeases them" and urging them to "go within to seek the solution to what ails them."

UPDATE: April Reign -- the attorney and media consult from Washington DC whose tweet Peterson called out as being emblematic of "black racism" -- reached out to Raw Story and offered the following refutation of his arguments:

I take issue with Mr. Peterson’s characterization of my comments as both angry and representative of the African American community as a whole. I am not angry at all, although I’m aware that this “angry Black woman” trope is trotted out all too often by those who are unable to engage in civil debate. On the contrary, I appreciate the effort Starbucks is attempting to make to further discussions about racism. However, while the intent may have been good, I believe the execution was poor. There were better ways to address this issue, and I would welcome the opportunity to speak with Starbucks executives about them. In addition, I speak for me, not an entire community or race as a whole. This is obvious since, while both Mr. Peterson and I are Black, we hold distinctly divergent views.

Calling me and others “Black racists” is a misnomer because racism is built upon systemic and structural inequality and discrimination. So while people of color can be bigoted or discriminatory, they cannot be racist. However, I wouldn’t expect Mr. Peterson to understand this since he believes Black people use the term “whitey,” as indicated in his screed.

It’s also unclear to me what “stuff” Mr. Peterson thinks Black people would be taking from whites, since not even free coffee was mentioned as part of the #RaceTogether initiative. Perhaps he meant welfare or another government program unfairly associated with people of color, but that would be wrong as well, since it is well documented that it is white people who make up the majority of the welfare rolls.

Most importantly, I believe it’s important that one not blame the victim, which is what it appears Mr. Peterson is doing. He states that it is Blacks who have set race relations back 150 years, as opposed to the reality of the daily injustice that Blacks and other people of color face daily merely for existing. Mr. Peterson states that white America has “dropped the racism in their hearts;” the DOJ report on Ferguson and countless examples around the country reflect otherwise. I’d be happy to have a #RaceTogether conversation with Mr. Peterson at the Starbucks of his choosing. We could begin with why he thanked God and white people for slavery.

Lastly, I’m not interested in squelching any conversation about race. However, I believe there is a time and a place for everything. As was reflected in my tweet, the time it takes for a barista to make my drink is not enough to truly discuss the racial divide in this country with the nuance that is required. Further, I do not believe that a barista with just a few months of “racial sensitivity” training is the best qualified to facilitate this discussion.