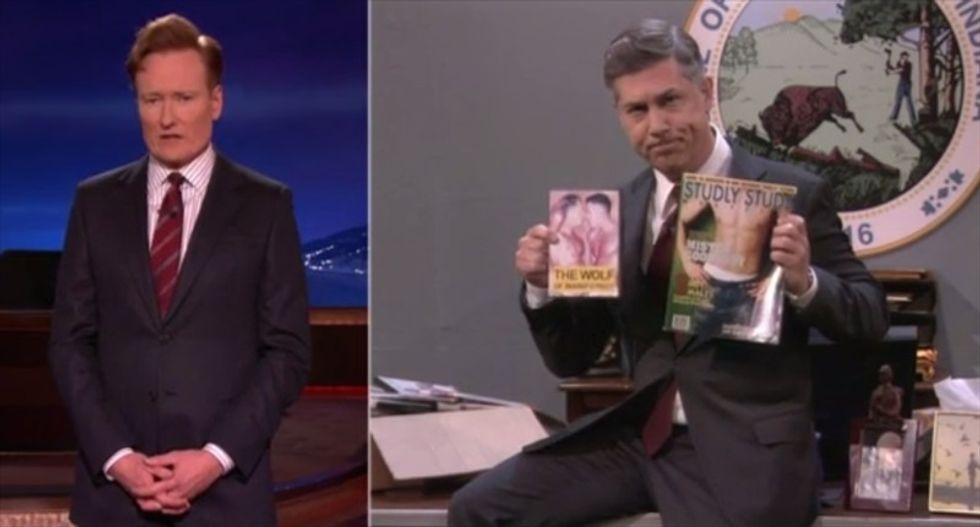 Conan O'Brien's debate regarding Indiana's anti-LGBT "religious freedom" law veered off course on Tuesday when the state's self-proclaimed "religion czar" shared way too much about his research into the issue.

"So, sir, your research has consisted entirely of reading and watching gay pornography," O'Brien asked.

"Now you're starting to sound like my ex-wife," Beederman chided, after defending the Republican-supported law by saying it was more about protecting Christian businesses than discriminating against the gay community.

"It is a known fact, Conan, if there are any homosexuals nearby, God cannot hear your prayers," Beederman argued.

He also boasted that he honed his "gaydar" by combing through the dating app Grindr, to the point that he no longer needed it to "red flag" any gay men nearby.

"If I sense there's a homosexual nearby, my gaydar goes off, and my penis instantly lengthens and hardens, veering up defensively," he assured O'Brien.

"That's not gaydar," the host protested, before Beederman demonstrated his method of "poking" any offending gay men away from him.

Watch the segment, as posted online on Tuesday, below.