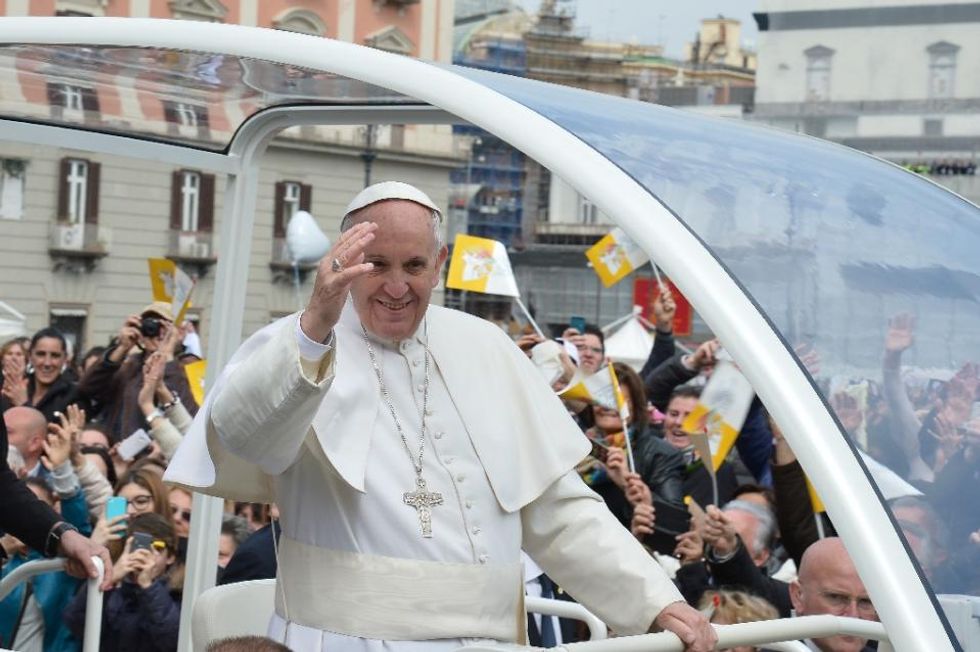 Hundreds of thousands of people waving Vatican flags on Saturday greeted Pope Francis as he headed deep into mafia territory, visiting jailbirds and the poor in Naples amid heightened security.

The pontiff arrived in the poor, crime-ridden Scampia area of the city in a popemobile and immediately plunged into a crowd of children and young people, two of whom managed to pose for a selfie with the pontiff.

"Corruption stinks, corrupt society stinks," he told residents, adding that "we all have the potential to be corrupt and to slip into criminality".

"Convert to love and peace. It is always possible to return to an honest life. There are mothers weeping for it in Naples' churches," Francis told some 100,000 people gathered for Mass in Piazza del Plebiscito in Naples' historic centre.

Up to 800,000 people were expected to turn out through the day in the southern Italian city to greet the Argentine-born pontiff, who last year declared war on organised crime by excommunicating all mafiosi from the Catholic Church.

Security was tight for the visit: apart from risks posed by gangsters with a grudge, the pope has been threatened by the Islamic State group and trips outside the Vatican are considered prime opportunities for assassination attempts.

After a massacre at a Tunisian museum this week claimed by the IS group, all eyes were on the elderly pontiff's safety, with 3,000 extra policemen deployed along the route he will take, including snipers on the rooftops.

Before his arrival in Scampia, Pope Francis began the day at the ancient Roman city of Pompeii.

The pope, who frequently focuses on the plight of the downtrodden, spent about an hour and a half with some 120 inmates, including transsexuals, at the city's overcrowded Poggioreale prison, where 2,500 prisoners are squeezed into a space for 1,400.

"Even the bars of a prison cannot separate you from God's love," Francis said. "Even if you have erred, the lord does not grow tired of showing you the way back."

The pope also pleaded for shelter for the African and Asian immigrants who have flooded into the Italian city and have ended up homeless.

"They are citizens, not second class citizens. We are all immigrants, sons of God on the path of life. No one has a fixed abode on Earth," Francis said.

Francis spoke about the ills weighing upon the region, including a youth unemployment rate that has hit 40 percent. He noted that charity and scholarships were no substitute for working.

"Not having the possibility to bring home wages is like seeing one's dignity stolen," he added.

Some of his fiercest words were kept for the Camorra, the notorious Naples mafia dissected and exposed in journalist Roberto Saviano's award-winning novel "Gomorrah" and the acclaimed 2008 film of the same name.

"Respond forcefully to the organisations that corrupt and exploit the young, the poor and the disadvantaged with the cynical business of drugs and other forms of trafficking," Francis said.

Last year the pope expelled all unrepentant mafia members from the Church and condemned them to Hell in the afterlife in a move which sparked fears of retaliation from the underworld.

During a visit to territory controlled by the powerful 'Ndrangheta organisation in the southern Italian Calabria region, he described the mafia as "the adoration of evil and contempt for common good."

"This evil must be beaten, expelled," he said, calling for historic ties between organised crime and the Church to be severed -- an appeal he is likely to repeat in Naples.

Numerous priests fight against Italy's big three -- the Cosa Nostra in Sicily, the 'Ndrangheta in Calabria and the Camorra in Naples -- sometimes paying for their bravery with their lives.

But the Italian Church also has a darker side. Mafia dons have historically attended mass, often receiving lavish funerals and presenting themselves as Catholic benefactors, aiding local residents where the state has failed.

Priest Luigi Ciotti, who has dedicated his life to the fight against the mafia, said the pope's visit would mean a huge amount to a city he described as "marvellous but bitter, generous, but living with many wounds."