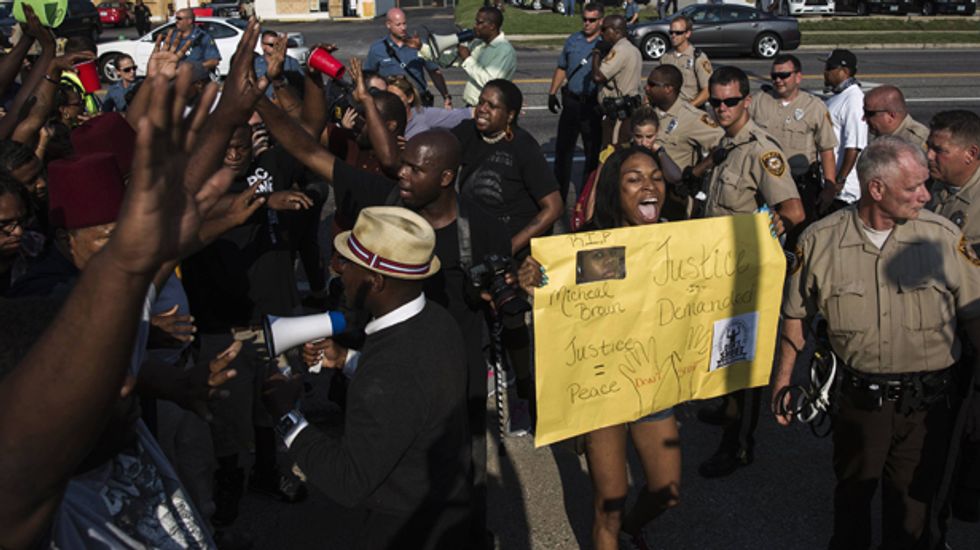 Demonstrators are confronted by police and told to keep moving, during a peaceful march in reaction to the shooting of Michael Brown, near Ferguson, Missouri August 18, 2014. REUTERS/Lucas Jackson

It's super frustrating that the result of the Department of Justice investigation into Ferguson, MO is going to end up mostly being a report. An incredibly scathing report, of course, but I fear that the lack of material consequences for running an egregiously racist police department will signal to other racist police departments that they can continue with confidence with fear of nothing more than perhaps temporary embarrassment---embarrassment that will be easy to weather because it will be leavened by support from white people who believe that the main role of police departments should be to terrorize black citizens into submission.

But that frustration shouldn't overshadow the fact that this report is, indeed, hard-hitting. The Washington Post has 12 key highlights. All of them are very frustrating, but the one that keeps haunting me is this:

In movies, one way they show that the setting is a totalitarian environment---whether a fictional dystopia or a real one like Nazi Germany---is to show characters are afraid to go outside, scurrying from location to location, knowing that every minute you're outside the scary and draconian police force could decide to single you out, making trumped up accusations and ruining your life just to show onlookers that their power is absolute and not to be questioned. It's an effective way to show the existential terror of living under fascism, because it's just so arbitrary and makes the very process of living your life seem fraught.

Unfortunately, that sort of living appears to be a reality for many black people living in America.

I don't know what to add to that. Our nation should be ashamed, but instead we're probably just going to get a bunch of people who claim to "love" freedom defending these totalitarian strategies, where even just playing a basketball game on a weekend means risking life's ruin.