Ex-skinhead moved by Auschwitz survivor’s forgiveness: ‘She never met me before, but I know she loved me’ 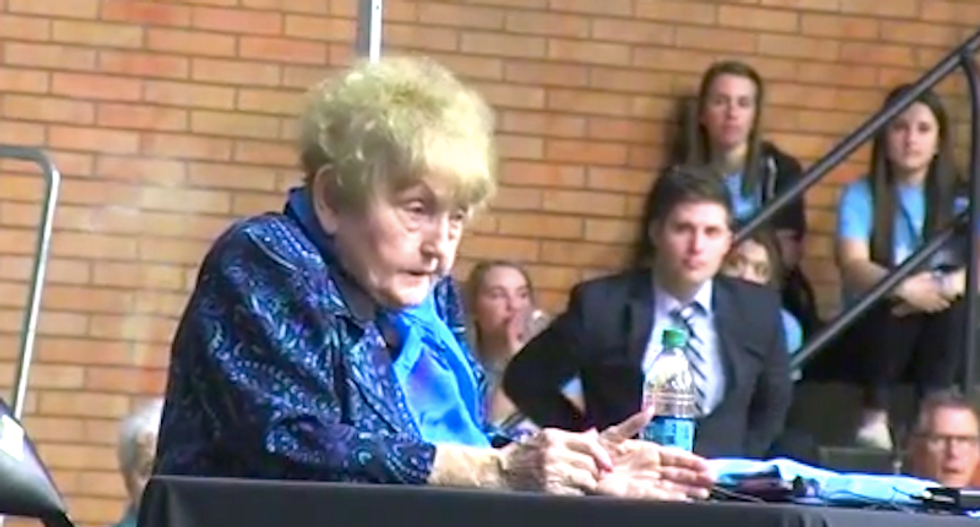 An Auschwitz survivor offered forgiveness to a former white supremacist whose grandfather was a Nazi trooper.

Eva Kor, a Romanian Jew who as a child endured the inhumane experiments with her twin sister of Dr. Josef Mengele, spoke Tuesday night at a Montana high school, reported the Billings Gazette.

Before her talk at Billings West High School, the tiny 81-year-old met with 42-year-old Thomas Adams -- a hulking, German-born former skinhead who had abandoned his racist past after becoming a born-again Christian.

“You are among the rare people who realizes that this is not for you, and you really have to divorce yourself from the past, right?” said Kor, who said she forgave her Nazi tormenters about 20 years ago.

Adams, who wore homemade swastika armbands to school as a boy, admitted that it had been a struggle for him since rejecting white supremacist beliefs eight years ago.

“You realize, ‘I am my own person, I don’t have to do what all these people do,’” Kor said. “That is really the way you change the world, by changing people who have taught you wrong and find your own way in life. You are a role model for them.”

Adams was born in Bavaria, and his grandfather served in the Schutzstaffel, commonly known as the SS, although he died not long after his grandson was born.

"I felt that because my grandfather was in the German army, that was what I wanted my identity to be," he told the newspaper. "I was just looking for it in the wrong place."

His mother married an American soldier when Adams was 4 years old, and as a boy he moved between the U.S. and Germany – where relatives introduced him to white supremacist views.

"I had a great childhood -- my mother loved me, my stepdad loved me," Adams said. "But I remember growing up that a certain amount of pride and entitlement engulfed my thinking about the superiority of the white race."

He eventually joined a neo-Nazi gang that was preparing for a racial holy war, the newspaper reported, but he gradually moved away from the organization after he got married in 1997.

But he continued to hold white supremacist views until he became a Christian with the help of the Rev. Alex Chai, of the Faith Chapel.

“I knew God had a crazy ride for me when he had a white supremacist give his life to Christ facilitated by a Korean pastor,” Adams said.

During their brief meeting before her talk, Kor embraced Adams, told him he had a beautiful family, and encouraged him to smile.

“Smiling makes us all look a lot better than crying, and it’s good therapy,” Kor said. “Somebody said a long time ago, laughter is the best medicine.”

Adams said the elderly Holocaust survivor made him feel comfortable.

“She never met me before, but I know she loved me,” he said. “She just has a presence about her.”