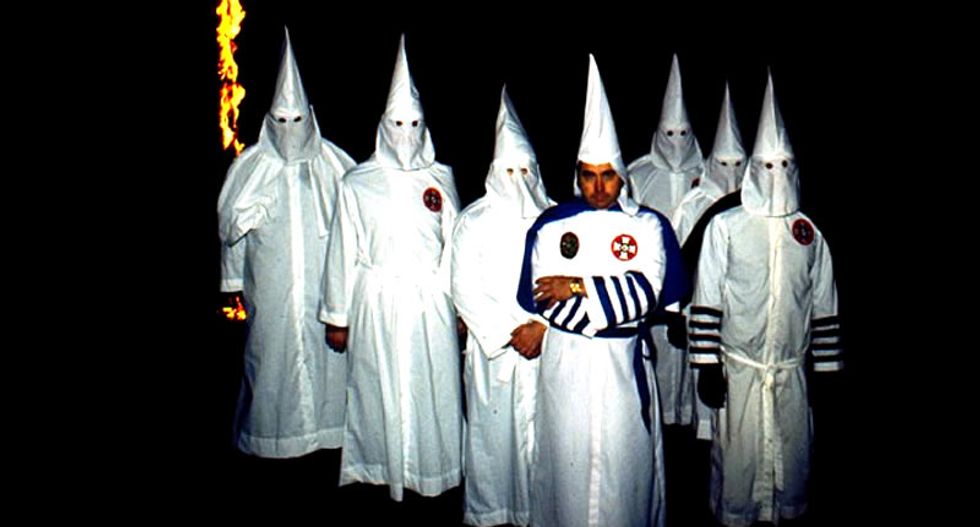 The former Imperial Wizard of what the Justice Department once described as the most violent faction of the Ku Klux Klan has turned up after disappearing nearly 30 years ago -- and he is living among the very races whose intermingled existence he once decried.

According to The Daily Mail's Ryan Parry, Bill Wilkinson is now a multimillionaire who runs a resort in San Pedro, off the coast of Central America. The island's non-tourist population is mostly black, Mayan, and Hispanic.

"Life is real good, I love the island, it's full of very friendly people," he said. "I enjoy scuba diving, that's what I came here for, snorkeling, fishing. People here know about my past but they don't care, they accept me for who I am."

That past includes encouraging the Klan to brandish "submachine guns and sawed-off shotguns at rallies" and creating "a network of hidden commando camps where Klansmen and their women and children are being taught how to kill." He was suspected of being involved in orchestrating the events that led to a shootout between Klansmen and members of the Southern Christian Leadership Council in 1979.

When he disappeared in 1984, he had been leading the most powerful Klan faction -- Wilkinson had defeated David Duke in an intra-Klan power struggle in 1975, leading the future Louisiana representative to form the Invisible Empire, Knights of the Ku Klux Klan -- for more than a decade, and was notorious for his strict segregationist views.

"They've got their place and we've got ours," he said of blacks to The Sarasota Herald-Tribune in 1981. "There's plenty of wide open space in Africa."

Wilkinson still believes in the necessity of racial segregation. "I am a segregationist," he told The Daily Mail. "I believe in no intermingling in the schools and churches, things of that nature."

"I'm the same man I've always been," he continued. "I wouldn't let one [a black person] marry my children or grandchildren."

Wilkinson took The Mail reporter Parry on a tour of the town to show just how well he mingled with the locals, but when Parry informed one of them of Wilkinson's segregationist views, he said that "He may think that, but that's not what everybody thinks. He speaks like we can't all live together, but he's living in a fucking town where all the people live, you've got black people, you've got Mayans, you've got Creoles, you've got Spanish."

"It takes a mentally insane person to think like that."

Watch a video of Wilkinson via The Daily Mail below.