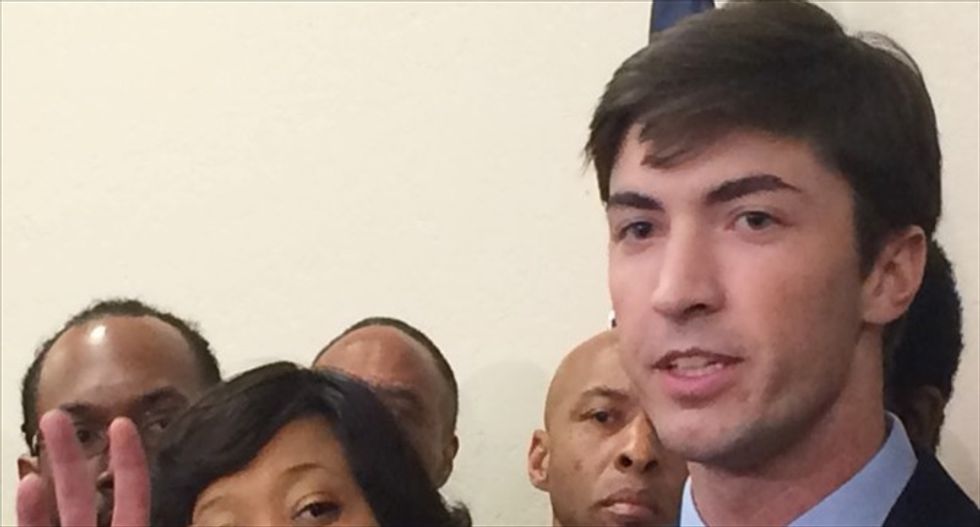 Levi Pettit, the former University of Oklahoma student speaks to the media after a meeting with civil rights leaders and apologized for his actions, in Oklahoma City, Oklahoma on March 25, 2015. Photo by Heide Brandes for Reuters.

A former member of a University of Oklahoma fraternity chapter apologized for taking part in a racist chant that made national headlines after being posted online, the Associated Press reported on Wednesday.

"If there is anything at all that I can salvage from my mistake, I would hope it can include arming myself with the tools to move forward with my life," Levi Pettit said following a meeting with black community leaders in Oklahoma City. "Maybe even somehow help prevent this sort of thing from happening again elsewhere."

Pettit and another student, Parker Rice, were expelled from the university after being caught using an anti-black slur alongside fellow members of the Sigma Alpha Epsilon fraternity.

The fraternity's national leadership also closed down the Oklahoma chapter as criticism poured onto the group. KFOR-TV reported that the fraternity has reached an agreement with the university stipluating that no other members will be kicked out. The school's president, David Boren, will release findings from an investigation into the racist chant on Friday.

Pettit refused to identify the person who taught him the chant, or where he learned it. Instead, he asked for forgiveness, saying that he was sorry "for all the pain that [he has] caused."

"There are no excuses for my behavior. I never thought of myself as a racist," he said. "I never considered it a possibility, but the bottom line is that the words that were said in that chant were mean, hurtful, and racist."

State Sen. Anastasia Pittman (D), who leads the state's Black Caucus, was among those who joined Pettit during his remarks. She said he contacted her last week and vouched for his sentiment.

"I admire his courage of reaching out to me and saying: `I want to meet with you face to face and apologize to you directly,'" she said. "I believe he is sincere."

Watch Pettit's statement, as posted by WFOR, below.