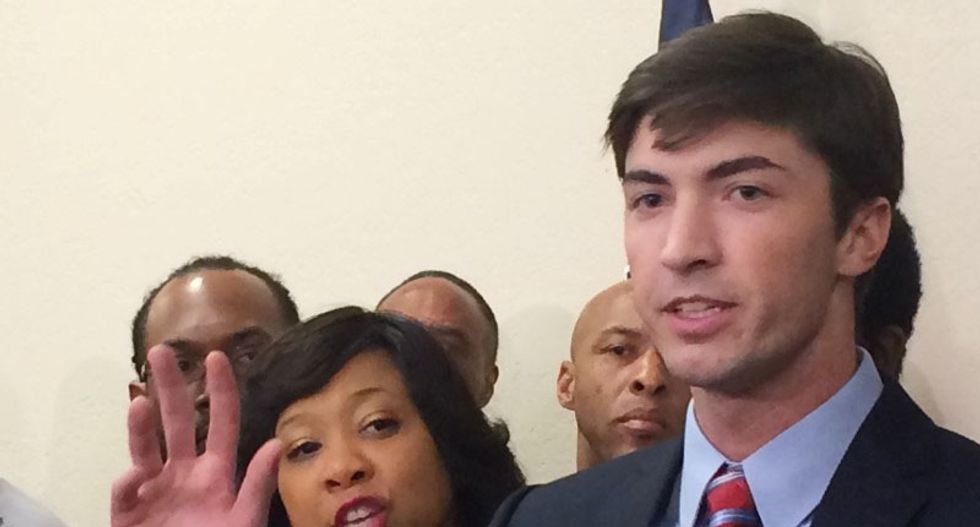 Levi Pettit, the former University of Oklahoma student speaks to the media after a meeting with civil rights leaders and apologized for his actions, in Oklahoma City, Oklahoma, March 25, 2015. Pettit, seen in a video leading a racist song at a fraternity outing, says he will carry the shame of his words for the rest of his life. REUTERS/Heide Brandes

A racist song chanted by members of a University of Oklahoma fraternity was learned at a national Sigma Alpha Epsilon leadership cruise four years ago, school President David Boren said on Friday.

Speaking at a news conference, Boren said the two students who lead members in the chant have been expelled from the university, while 25 others have been disciplined over the incident, which was recorded and shown on the Internet.

After SAE members at the university heard the song, it eventually "became part of the institutional culture of the chapter," Boren said, adding he has asked the national leadership to explain how the song was disseminated.

The 10-second video was shot on a bus chartered for a date night by the Sigma Alpha Epsilon fraternity and posted online this month. Students are seen and heard chanting in unison, using offensive language referring to black people and vowing never to admit them to the fraternity.

The university shut the SAE chapter at the school and expelled Levi Pettit, 20, and Parker Rice, 19. The two have apologized for their actions in written statements.

On Wednesday, Pettit met civil rights leaders and apologized again, telling a news conference he will carry the shame of his words for the rest of his life.

(Reporting by Jon Herskovitz in Austin, Texas and Heide Brandes in Oklahoma City; Editing by Will Dunham and Alan Crosby)