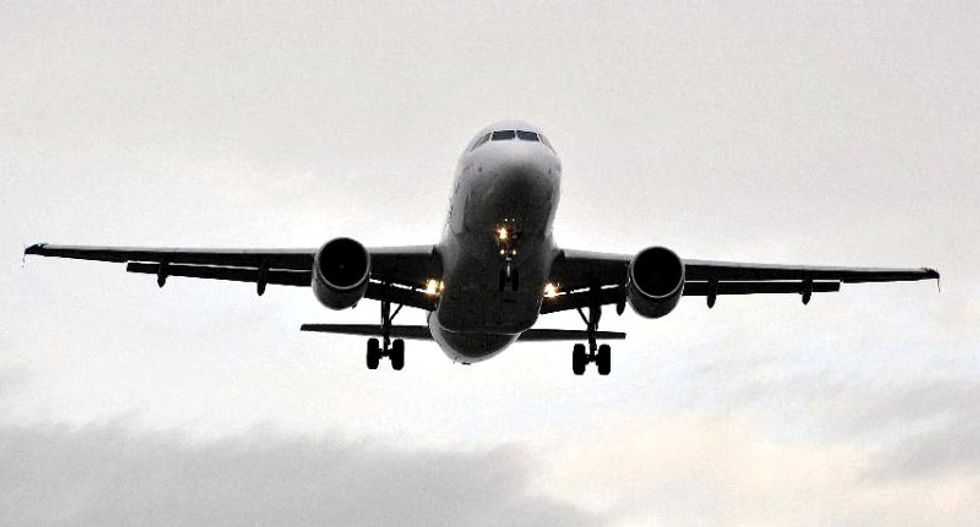 Airbus has won thousands of orders for the model, with nearly 6,200 aircraft from the A320 family currently in service worldwide (AFP Photo/Pascal Pavani)

A plane operated by the budget carrier of Germany's Lufthansa crashed in a remote area of the French Alps Tuesday, killing all 150 on board in the worst plane disaster in mainland France for four decades.

Germanwings said the Airbus A320 plunged for eight minutes into a snowbound inaccessible mountain area in southeastern France, but French officials said no distress signal had been issued.

The plane, carrying 144 mainly Spanish and German passengers and six crew, was travelling from Barcelona to the western German city of Duesseldorf when it came down near the ski resort of Barcelonnette.

French Prime Minister Manuel Valls said there were no survivors, adding that the authorities "can't rule out any theory" on the cause of the disaster.

Spanish authorities said 16 German teenagers on a school trip were feared to be on board the doomed plane, as tearful relatives converged on the airports in the two cities anxiously seeking information about their loved ones.

It was the first fatal accident in the history of Germanwings, and the deadliest on the French mainland since 1974 when a Turkish Airlines crashed, killing 346 people.

"It is a tragedy, a new airline tragedy, we will determine what caused the crash," French President Francois Hollande said.

Hollande said the dead included Germans, Spaniards and "probably" Turks, while Brussels said at least one of its nationals was on board.

Germanwings said 67 Germans were believed to have been on board while Spain said 45 people with Spanish sounding names were on the flight.

A crisis cell has been set up in the area between Barcelonnette and Digne-les-Bains along with an emergency flight control centre to coordinate the operation to the crash site.

"Ground access is horrible, I know the Estrop massif, it's a very high mountainous area, very steep and it's terrible to get there except from the air during winter," local resident Francoise Pie said.

A witness who was skiing near the crash site told French television he "heard an enormous noise" around the time of the disaster.

A French police helicopter dispatched to the site of the crash reported spotting debris in a mountain range known as "Les Trois Eveches," which lies at an altitude of 1,400 metres (4,600 feet).

Chancellor Angela Merkel said she was "shocked" by news of the accident and would immediately travel to the crash site, while Spanish King Felipe VI cut short his state visit to France after news of the tragedy.

The plane belonged to Germanwings, a low-cost affiliate of German flag carrier Lufthansa based in Cologne.

"We've never had a total loss of aircraft in the company's history until now," a company spokeswoman told AFP.

A spokesman for Airbus, the European aerospace giant, did not give any information about possible causes but said the company had opened a "crisis cell".

French civil aviation authorities said they lost contact with the plane and declared it was in distress at 10:30am (0930 GMT).

However, the aircraft's crew did not send a distress signal, civil aviation authorities told AFP.

"The crew did not send a Mayday. It was air traffic control that decided to declare the plane was in distress because there was no contact with the crew of the plane," the source said.

In 1981, a plane crashed on the French island of Corsica with 180 people on board.

The world's worst air disasters remain the March 27, 1977, collision of two Boeing 747s on the runway at Tenerife in the Canary Islands, killing 583 people, and the August 12, 1985 crash into a mountainside of a Boeing 747 belonging to Japan Airlines, killing 520 people.

France's leading air traffic controller union SNCTA called off a strike planned from Wednesday to Friday after news of the crash.

"We are suspending our planned strike as a result of the emotions created in the control rooms by the crash, particularly in Aix-en-Provence," the union's spokesman Roger Rousseau told AFP.

Lufthansa itself was hit by a four-day pilots' strike last week, although this did not affect Germanwings.

Shares in Airbus and Lufthansa were both down after the tragedy.