Hillary Clinton inducted into the Irish America Hall of Fame 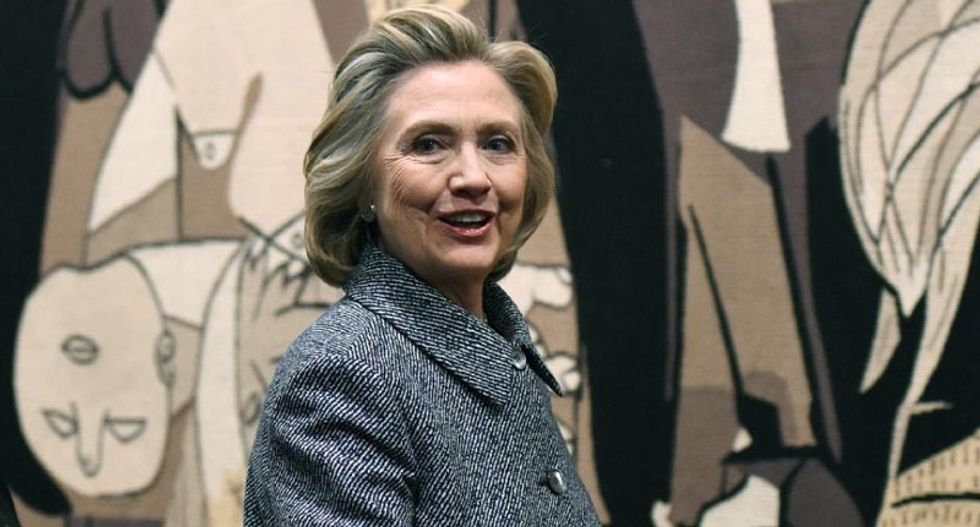 Hillary Clinton was honored for her contribution to the Irish peace process on Monday, lunching with prominent Irish and Irish Americans, including Sinn Fein leader Gerry Adams, in New York.

Decked in emerald green, the former US Secretary of State and likely 2016 presidential candidate said ending such conflicts could serve as an example for her granddaughter Charlotte and a new generation building a better world.

Inducted into the Irish America Hall of Fame, Clinton will no doubt hope such events with key voting communities will help stem controversy after the furor over her use of a private email account while in office.

Some may question her appearance alongside Republican leader Adams, who this week saw long-standing allegations that he ordered paramilitary murders as an IRA commander resurface in the New Yorker magazine.

But Clinton addressed his presence head-on, arguing that husband President Bill Clinton's decision to grant him a US visa, which eventually came in early 1994 despite vigorous opposition from US ally Britain, put in motion events that ultimately led to peace.

"I remember very well when the request came back in 1993 that my husband approve a visa for Gerry Adams, who is with us today," she said. "It was a very difficult decision.

"It seems like an obvious one in retrospect but at the time, much of our own government, certainly other governments, were against such a gesture.

"And I think it is true that absent that first step, that first risk, we might not have had the momentum to move forward to get to the Good Friday Accords," Clinton said.

Adams, is president of Sinn Fein -- the political wing of the now-defunct Irish Republican Army -- and is widely credited with playing a role in bringing peace.

But The New Yorker this week published an article citing witness claims that Adams ordered killings despite his frequent denials.

Expanding on one of her key themes -- the role women can play in improving society -- Clinton accepted the honor "on behalf of all the remarkable women that I met and admired in Northern Ireland."

"You can't have lasting peace and progress without people believing life will be better because of it.

"There has to be genuine economic and social inclusion. That's true there and that's true around the world."

Referring to her cherished grandchild, she called on people to provide better opportunities and peace for the next generation.

"When I look at Charlotte, who will be six months at the end of this month, I am reminded that she will have many, many opportunities," she said.

"We will do whatever we can to give her the best education, the best understanding of values and how to treat others but I would like that for every child," she said, to applause.

In remarks that could perhaps be true of her own long-burning political hopes, she also said the road to success was long.

"The goal was never given up, it just took time to build some kind of relationship," she said.

"I think it's a great lesson for so many who have their own conflicts, their own divisions, and it's also a great reminder that work in the North is not finished."

Clinton was First Lady and her husband Bill was president of the United States when the Good Friday Agreement, generally seen as the end of the decades-long sectarian conflict, was signed in 1998.

"Hillary Rodham Clinton is one of the unsung heroes of the success of the Irish peace process," Niall O'Dowd, publisher of Irish America magazine, told The New York Times last month.