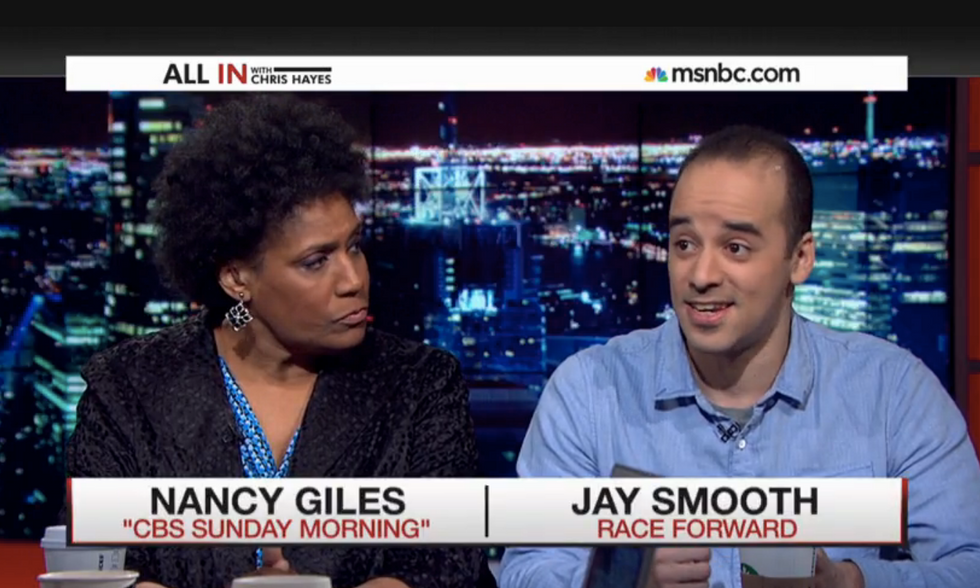 In one of the most cringe-worthy moments of television you will ever see, on Tuesday night's All In with Chris Hayes, activist Nancy Giles of CBS Sunday Morning accused hip hop critic and cultural commentator Jay Smooth of being a white man who is trying to "code switch," i.e., talk "black" to reach the rap audience.

Smooth -- who was born John Randolph to a black father and a white mother -- gently explained to Giles that he is, in fact, black.

The discussion began innocently enough, with Hayes and his two guests discussing Starbucks CEO Howard Schultz's decree that all U.S. baristas should write the words "Race together" in Sharpie on their paper cups in order to foster a dialogue about race with their customers.

But after watching Smooth's clip "How to Tell Someone They Sound Racist," Giles took it upon herself to comment on Smooth's "co-opting blackness."

"I can't not tease Jay about the kinda like 'brotha' way he was trying to talk, like, 'Hey,' with the rap music in the background, and like down with the people," Giles said.

She continued, "Yeah, I know, but it's another interesting, funny thing about race. Like, there would be some people that would feel that you co-opted something like that, and other people might feel like that's his background and that's really cool, too. These are conversations, you know, 'Yo, like ya know, yeah, if somebody takes my wallet,' I mean it's really interesting."

"It's also interesting because I'm actually black, but you assumed otherwise," Smooth countered. "And this is the sort of awkwardness that we can look forward to at Starbucks across America."

[Hat-tip to Gawker's Morning After]