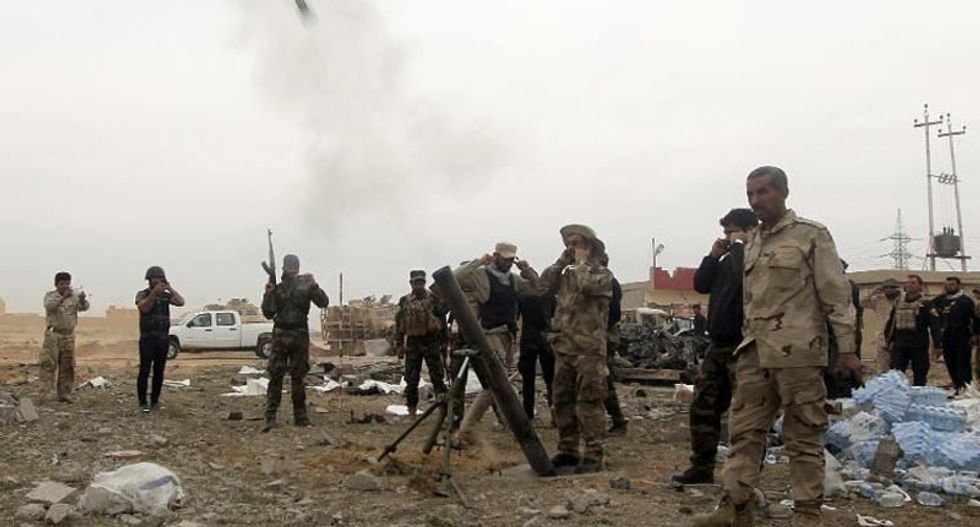 Iraqi Shiite fighters of the government-controlled Popular Mobilisation units launch mortars towards Islamic State (IS) group fighters holed up in the centre of the city of Tikrit on March 12, 2015 (AFP)

Iraqi forces Friday battled Islamic State jihadists making what looked increasingly like a last stand in Tikrit, but the group responded by vowing to expand its "caliphate".

Thousands of fighters surrounded a few hundred IS holdouts, pounding their positions with helicopter and artillery strikes but treading carefully to avoid the thousands of bombs littering the city centre.

Two days after units spearheading Baghdad's biggest anti-IS operation yet pushed deep into Tikrit, a police colonel claimed around 50 percent of the city was now back in government hands.

"We are surrounding the gunmen in the city centre. We're advancing slowly due to the great number of IEDs (improvised explosive devices)," he told AFP.

Massively outnumbered, the jihadists are defending themselves with a network of booby traps, roadside bombs and snipers, with suicide attackers occasionally ramming car bombs into enemy targets.

"Six soldiers were killed and 11 wounded in a suicide car bomb this morning in Al-Dyum neighbourhood," the colonel said. An army major confirmed the death toll.

Tikrit was the hometown of dictator Saddam Hussein, remnants of whose Baath party collaborated with the jihadists when they took over almost a third of the country last June.

With crucial military backing from neighbouring Iran and a 60-nation US-led coalition, Baghdad has rolled back some of the losses.

It started by securing the Shiite holy cities of Karbala and Najaf and bolstering Baghdad's defences, then worked its way north, retaking Diyala province earlier this year.

Commanders see the recapture of overwhelmingly Sunni Arab Tikrit as a stepping stone for the reconquest of second city Mosul further north, which once had a population of two million.

IS has countered every military loss lately by ramping up its propaganda war with ever more shocking acts, such as a boy apparently executing a prisoner on camera, and destroying prices archaeological heritage sites.

On Thursday, the group released a recording said to be a speech by spokesman Abu Mohammed al-Adnani accepting a pledge of allegiance by Nigeria's Boko Haram jihadist group.

"We announce to you the good news of the expansion of the caliphate to West Africa," he said.

Expansion is a pillar of IS doctrine, and the group has recently declared new "provinces" in the Middle East and North Africa, albeit sometimes in places where it has a limited footprint.

Adnani shrugged off recent losses in Iraq and Syria, vowing to enter Rome, blow up the White House, Big Ben and the Eiffel Tower.

Some analysts have argued that months of battlefield setbacks and air strikes were taking a toll on the group and that some of its latest moves concealed growing desperation.

Adnani lashed out at predominantly Shiite Iran, which he accused of building its own regional empire by meddling in Iraqi and other regional conflicts.

He called Qassem Soleimani, the commander of Tehran's external operations, "the dirty Safavid (a term IS uses in a derogatory way to designate Iranians) leader of the battle."

The once-invisible Soleimani, who has been in charge of Iran's covert operations for years, has been ubiquitous on Iraq's frontlines, and his myth is growing among Shiite fighters.

He appeared in a rare mobile phone video released Thursday, giving advice in Arabic, apparently to the sons of a prominent Iraqi militia leader on how to behave themselves.

Soleimani has been seen with Iraq's top commanders since the start of the Tikrit operation and is thought to be playing a key coordinating role.

"That Soleimani has become acceptable can only be explained by the collapse of the Iraqi army last summer," said Kirk Sowell, the publisher of the Inside Iraqi Politics newsletter.

The way the army disintegrated when IS swept in nine months ago has led many Iraqis to give more trust and credit to the paramilitary Shiite groups supported by Iran.

"When people feel endangered, they always reach for a saviour," Sowell said.

"It is imperative for the state to increase the attention and care for all the brother fighters and do its utmost to increase their performance and preserve gains," Sistani said in remarks read out by his representative.