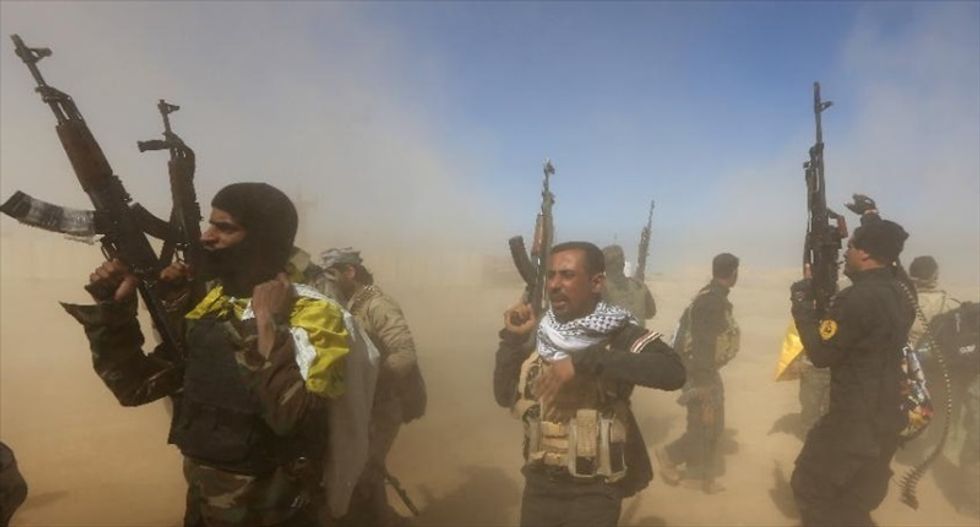 Iraqi fighters gather at the western entrance to the city of Tikrit during an operation to take control of the city from the Islamic state group, on March 11, 2015. (AFP)

Iraqi forces have entered Tikrit, dodging bombs and sniper fire in search of their biggest victory yet against embattled jihadists who tried to light new fires elsewhere in Iraq and Syria.

The Islamic State group has suffered stinging defeats in the heart of its self-proclaimed "caliphate" recently, but its ultraviolent ideology has inspired attacks and recruits globally.

With IS brutality and population displacement reaching new highs, Washington sought increased powers from the US Congress to take on a group threatening to reshape the Middle East.

However, it was without direct support from the US-led coalition's air campaign that Iraqi government and allied forces punched into parts of Tikrit on Wednesday, marking a new phase in a 10-day drive to wrest the city back from IS.

A combination of army, police and volunteer forces moved into northern and southern Tikrit, the hometown of former Iraqi president Saddam Hussein and a main IS stronghold.

A major general told AFP on condition of anonymity that government forces were battling "to cleanse the neighbourhood of Qadisiyah" in Tikrit.

"But we are engaging in a very delicate battle because we are not facing fighters on the ground, we are facing booby-trapped terrain and sniper fire. Our movement is slow," he said.

An army colonel said forces coming from another direction had also retaken the main hospital on the city's southern edge.

Early in the offensive, in which up to 30,000 men were initially involved while IS is believed to have just a few hundred fighters inside Tikrit, most outlying areas were reconquered.

The town of al-Alam, a flashpoint north of Tikrit along the Tigris river, was fully under the control of pro-government fighters and local anti-IS Sunni tribesmen Wednesday, an AFP reporter there said.

On the back foot in eastern and northern Iraq, IS tried to seize the initiative elsewhere, including with a spectacular coordinated attack in Ramadi in the west.

At least 17 people were killed and 38 wounded, according to a police lieutenant colonel and a doctor at Ramadi hospital.

Clashes ensued but IS failed to gain any ground in one of the biggest attacks against a rare pocket of government control in Anbar.

"Our brave security forces were ready and had excellent intelligence about the operation," Anbar Governor Sohaib al-Rawi said on social media.

In and around Baghdad on Wednesday, at least 17 people were killed in five attacks, including nine in a car bomb in the Hurriya neighbourhood.

Also on the offensive in Syria, the jihadists launched a "huge assault" Wednesday to try to capture a strategic town on the border with Turkey, killing dozens.

Their attack focused on Ras al-Ain and IS seized a nearby village, the Syrian Observatory for Human Rights said.

At least 12 fighters from the Kurdish People's Protection Units, which control Ras al-Ain and surrounding villages, were killed, he said.

IS has also ramped up its propaganda war in what some analysts see as a possible sign of desperation by a movement on its last legs.

After destroying several Iraqi heritage sites that are among the planet's most precious, the jihadists again shocked the world on Tuesday by releasing a video in which an Arab Israeli accused of spying for Israel is "executed" by a boy who looks no older than 12.

Around 140 Australians have travelled to Iraq and Syria to join IS and other jihadists, the government has said.

US Secretary of State John Kerry said it was a "pivotal hour" in the battle against the most violent group in the history of modern jihad.

Appearing before the Senate foreign relations committee, he and top US defence officials appealed for a united vote in favour of a new authorisation for the use of military force against IS.

The United States leads a 60-nation coalition involved in the fight against the jihadists and has carried out hundreds of strikes against IS in Iraq and Syria.

Iraq's other key foreign partner Tehran backs a number of the militias fighting IS but the Pentagon is uneasy about the role of Iranian advisers in the battle for Tikrit.

Their presence "is something that is concerning to us in particular because the sectarian danger in Iraq is the principal thing that can unravel the campaign against ISIS," US Defense Secretary Ashton Carter said Wednesday, using another name for IS.

Comments by Iranian-backed militia commanders had stoked fears that the recapture of Tikrit could lead to widespread sectarian reprisal killings.

But so far, reports of abuses by the mostly Shiite Iraqi forces battling IS in and around Tikrit have been relatively limited.