It's complicated: Why God and I no longer stay in touch 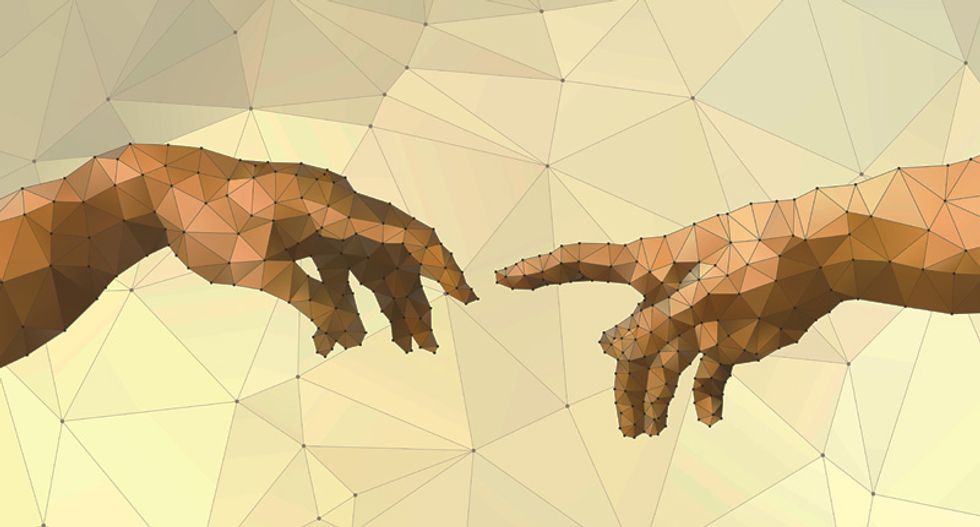 His reach should exceed His grasp (Shutterstock)

Long before I was born, my eternal soul was promised to the Father, the Son, and the Holy Ghost.

Because my parents wished to be wed in the local Catholic church, my father had to become a Catholic like my mother, and they had to promise to raise their eventual children - my brother, sister, and myself -- as Catholics. This included sending us to the school located on the parish grounds. In this heavenly trade-off we were the players to be named later, and a deal was struck.

My brother was enrolled at St. Brigid's Academy and I followed three years later, making the long 3-block walk to school decked out in a uniform of heavy corduroy pants, long-sleeved white shirt, and itchy wool sweater on the still very hot September mornings in Southern California.

Thus we learned of the suffering of Christ.

Because we were poor and my father's weekly salary was meager, the great Great Catholic School Promise was soon broken and we were moved several blocks north to the local elementary where San Diego kids dressed like kids from San Diego.

However we were still required to attend catechism classes on Saturday and church on Sundays, so we weren't entirely off the hook.

At age eight I had my first holy communion which requires entering the intimidating confines of a confessional and spilling your guts to a man you hardly knew, telling him your deepest and darkest secrets which, at age eight in 1963, were as non-existent as you can imagine. Because I less afraid of the wrath of our Father who art in heaven than I was of the wrath of my father who art on Earth, I had no sins to confess and was presented with quite a dilemma for an 8-year-old. Not knowing if it was okay to go in and say "No, I'm good, thanks for asking though," I lied and made some stuff up.

Thus I learned what a religious conundrum was.

As the rest of my family slowly begged off from attending church over the next few years, I kept on going by myself, caught up by the ritual. My break with Catholicism came when the monsignor began using English instead of Latin to deliver the mass which, to my ears, made it less magical and mysterious, and incredibly mundane. Who knew what he had been saying all those years before was so boring?

Not me, that's for sure.

My grandmother (mother's side) was the devout Catholic who pushed for the church wedding and I don't remember a time when she didn't attend services every morning, always contributing money and lots of it. My grandfather, on the other hand, was a confirmed and quite vocal atheist for the times who seemed to delight in needling my grandmother about discrepancies in the Bible in front of us grandkids as he chain-smoked Camel cigarettes and coughed and laughed.

Outside of that, religion in my life was put on the back-burner, although a frisson of Catholic guilt lingered, whispering in my ear like Jiminy Cricket in a pope hat and guiding me through life. I never thought of it as God speaking to me, so much as having learned the difference between right and wrong, and deciding that wrong seemed like a  lot of work, and being caught doing wrong was even more work so it was better to take the road less troublesome.

In those days people really didn't talk about religion, along with politics, money, alcoholism, and uncles who never married but always smelled nice. I never knew that one friend of mine was Jewish until we had been buddies for five years. I only recently learned via Facebook that another friend was -- and still is-- a Mormon, discovering this forty years after we graduated from high school.

Attending high school in the early 70's, I came of age during the rise of the so-called "Jesus freaks," who trolled the lunch court with bright smiles, the Good Book, an invitation to attend a "folk mass," and a simple question: "Have you accepted Jesus into your life?" My friend Mike was usually ready with something along the lines of "Yeah, Corinthians are so heavy when you're stoned" (70's drug humor -- ask your parents) unless the questioner was cute, in which case we would act interested for a bit looking for a secular opening -- which is not something dirty, although it sounds like it is.

Two different girlfriends tried to recruit to their churches during high school, and I played along, although I must admit I was less interested in their desire to help me enter the Kingdom of Heaven where God resides, and more intrigued in entering the Kingdom of the Their Bras where boobs reside.

I'll get to what I think about God and heaven in a bit, but I want to stop and say right here that coveting boobs when you're a teenaged boy would be a pretty bogus reason for having to spend eternity in hell being poked with pointy things. Totally uncool, on God's part.

God had one chance to snap me in my twenties when I was sailing far off the coast of Baja California, so far away from shore that there was no ambient light to mask a canopy of a million stars above me. All alone on a 3am watch, I stayed awake by playing music though speakers built into the deck, the sound carrying across a very calm sea on a very warm night. The single most perfect moment of my life occurred that night, sitting there all alone looking at the stars and listening to Joan Baez sing an a cappella version of "Amazing Grace." If God had spoken to me then, He probably could have sealed the deal.

But He didn't and later I listened to Bob Marley's "Babylon by Bus," and Jah didn't speak to me either, so I guess it either wasn't to be or there was some international maritime religious recruitment law at play that I'm still not familiar with.

When my wife and I decided to get married we went to the same church my parents were married in, figuring things might have loosened up a bit when it came time to talk money. We were wrong and we took our vows elsewhere, but in a supremely ironic twist, we ended up sending our daughter to Catholic school through high school after a few years in a Montessori Academy and brief cup of juice in a public school where she sat in the same 4th grade classroom that I did years before.

Because I have always described myself as an atheist -- kinda-sorta -- I have always felt awkward about the fact that we sent her to Catholic school, although, when she had the opportunity to attend a very good public high school, she stayed with Team Pope. Despite the time spent in parochial schools, she's not religious. But when the time came to choose a college she selected a Marianist one, although it probably had more to do with the fact that it was located in Hawaii within walking distance to Waikiki Beach.

I bring all of this up because I've thought a lot about Patton Oswalt's comments about atheists, saying they don't need to be jerks about it.

Although I am not a fan of what I think of as "feral Christians" -- those who rabidly want to shove their religion down everyone's throats -- I am also not a fan of militant atheists who match their hardcore Christian opponents, smugness for smugness. And the reason is because... I still don't really know about this atheism business anymore than I know about this God business. I hate calling myself an agnostic, which is the "almost pregnant" of theological thought and I'm not into worshiping Gaia, which is the kale (as in: unsatisfying) of theological thought. Although I don't believe in heaven or hell, I have also consciously hedged my bets, adhering to the Ten Commandments as best I can, although I sometimes get them mixed up with the Bill of Rights and wonder why God was not more clear about guns in the Second Commandment.

When my chain-smoking atheist grandfather found out he had incurable lung cancer, he became God's best Christian, no doubt out of fear of the unknown and what comes next: eternal afterlife, eternal darkness, or something we haven't figured out or made up yet. And this makes me wonder about when my time comes if I get a bit of an advanced warning. Will I reach back to that old time religion of my youth? Will I figure I did a pretty good job, all things considered and relative to all of you people? (Does God grade on a curve?) Will there be nothingness, like living in Indianapolis. Or will I slip into death expecting another great adventure, but taller next time?

And He ain't talking.

At least not to me.