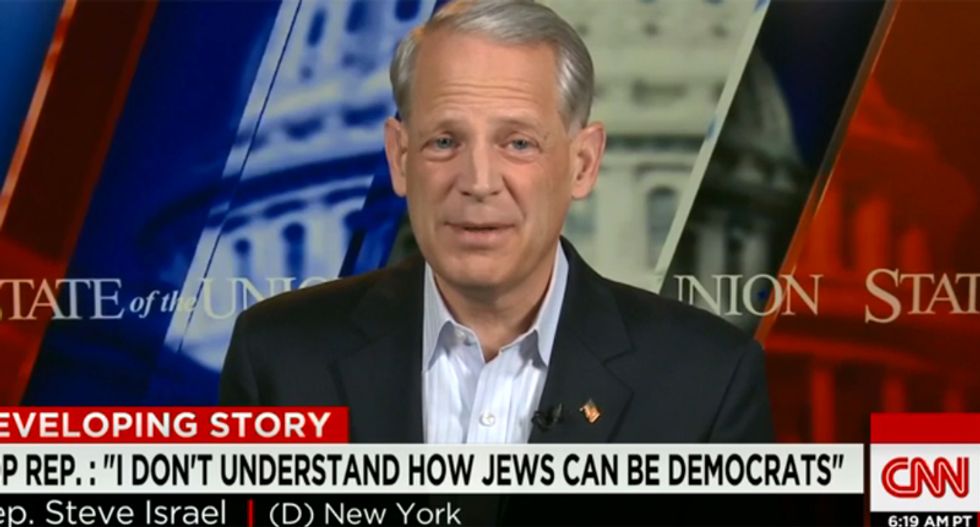 In a battle that has gone on for several days after Rep. Steve King (R) slammed American Jews whom he believes put the Democratic party before their religion, a Jewish Democrat went on CNN to mockingly refer to the Iowa Republican as a "Great Talmudic scholar."

King said during a radio interview on Friday, "Here is what I don’t understand. I don’t understand how Jews in America can be Democrats first and Jewish second and support Israel along the line of just following their president."

Late Friday, Rep. Steve Israel (D-N.Y.) responded to King on Twitter, saying, "I don't need Congressman Steve King questioning my religion or my politics. I demand an apology from him & repudiation from GOP. #dangerous"

Appearing on CNN's State of the Union Sunday morning, Israel continued chiding King for questioning his priorities, saying, "I don't need lessons from Steve King on what is like to be Jewish or a Democrat."

Israel noted that he "leans to the right on US-Israeli issues," and was the one to escort Israeli Prime Minister Bibi Netanyahu before he gave his controversial speech before Congress.

"Steve King, who said the the U.S. is a Christian nation, should not be lecturing Jews about how we should be Jewish" he explained. "You know Steve King doesn't know what chutzpah is, but Steve King defining Jews and talking about how we can't be Democrats and Jews at the same time? That's chutzpah."

Responding to a question that supporting President Obama over Netanyahu means that you are not supportive of Israel, the Democratic lawmaker smiled and said, "That great Talmudic scholar Steve King is going into areas he knows nothing about."