Jewish supermarket reopens in Paris after being attacked by jihadist 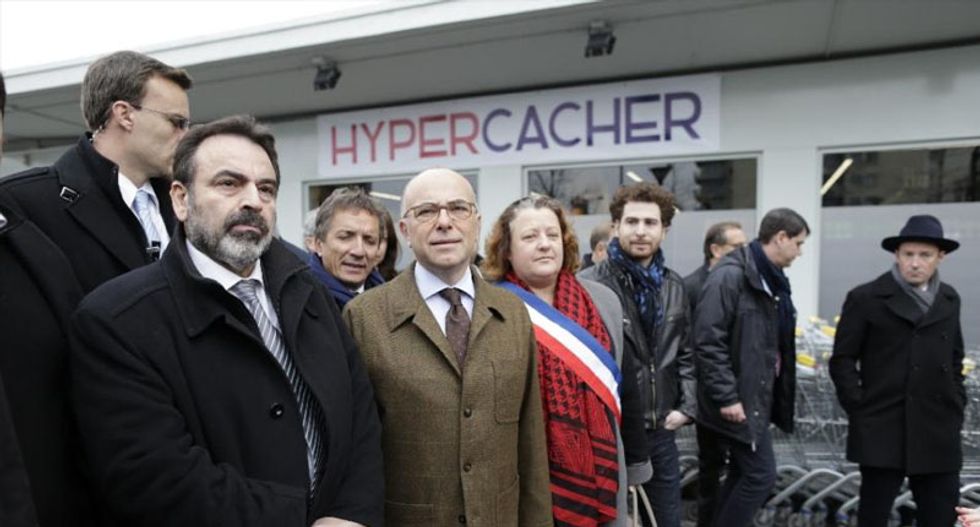 The Jewish supermarket in Paris attacked by a jihadist gunman linked to the shootings at Charlie Hebdo magazine in January reopened Sunday, with the French interior minister buying two bottles of wine to demonstrate his support.

"We were stunned by the attack, but there was never any question that we would reopen," said one of the managers of the Hyper Cacher store, Laurent Mimoun.

"It's very important to be here to show that we don't give up. It's a symbol," said Eric Cohen, father of supermarket worker Yohan Cohen, 20, who was murdered by the gunman Amedy Coulibaly on January 9.

Three other Jewish men were killed by Coulibaly in his attack, two days after Islamist brothers Cherif and Said Kouachi shot 12 people at the Charlie Hebdo satirical magazine offices -- twin assaults that plunged France into crisis.

Coulibaly was already believed to have shot dead a policewoman in another part of the capital before storming into the supermarket to show support for the Kouachi brothers, who by then were surrounded in a printing business outside Paris. All three gunmen were killed later that day in near simultaneous operations by special forces.

French Interior Minister Bernard Cazeneuve attended the reopening of the shop, which has been repaired after suffering heavy damage during the assault to kill Coulibaly and free the staff and shoppers he had taken hostage.

"You can see the layout... you see the difficulties there were in the intervention," Cazeneuve said after visiting the scene of the drama, including the cold storage room where several hostages, including one with a baby, managed to hide from Coulibaly.

Cazeneuve bought wine and praised the "courageous" reopening of the shop, which "sends a signal that life is stronger."

A new team of staff is working at the kosher supermarket, while employees who survived the bloody attack are free to decide "their new posting in one of the group's stores," the management of the chain said.

However, for now they are on long-term leave, including the young Malian immigrant Lassana Bathily, who was granted French citizenship as a reward for his bravery during the assault.

"With this reopening, we once again reaffirm that life will always be stronger than barbarity," the management of Hyper Cacher said in a statement.

The Israeli leader received criticism, however, for what many considered his politicisation of the tragedy in the run-up to this Tuesday's Israeli elections, where he faces a tough battle.

Netanyahu caused a stir when he attended a mass demonstration in Paris for the terrorism victims, with the Israeli newspaper Haaretz reporting that he had not been invited, but turned up anyway, causing a diplomatic ruckus.