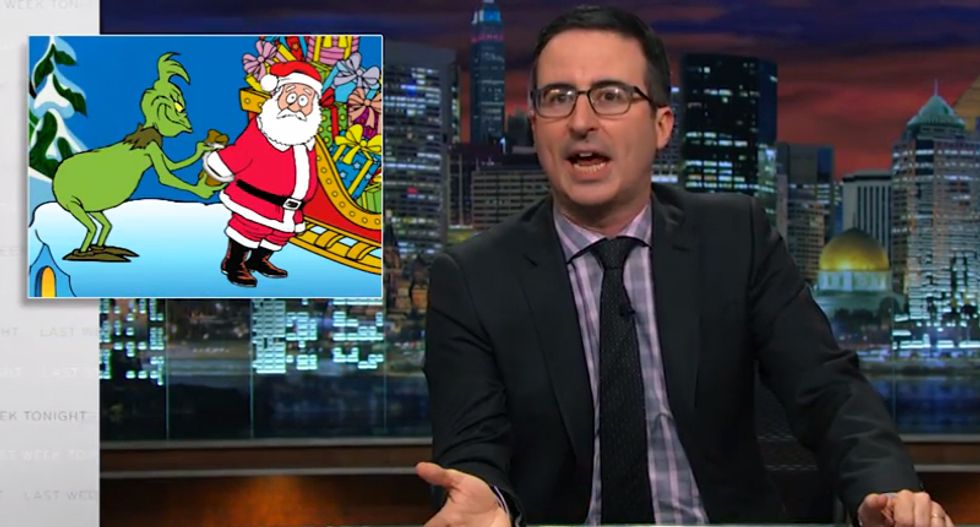 Taking a cue from the recent Justice Department report showing how the city of Ferguson, Missouri depended upon money derived from ticketing and fines levied disproportionately on the poor, HBO's John Oliver explained how a simple ticket can lead to putting people in what he called "the f*ckbarrel."

Noting that everyone "f*cks up" occasionally, Oliver decried how city municipalities bleed people unable to pay their tickets with additional fines that can lead to the loss of their driver's license leading to the loss of a job, which can then lead to incarceration.

"If you don't have enough money to pay a fine immediately, tickets can ruin your life," Oliver explained. "Most tickets come with a fine, and if you've ever lived paycheck to paycheck, you know that can be difficult. For example: in DeKalb County, Alabama, a speeding ticket is $255.50. If you earn minimum wage there, $7.25 an hour, it would take you more than 35 hours of work to pay that off."

Turning to Ferguson, he noted that the city manager was excited that local police had increased ticketing, leading to long lines of citizens standing for hours to pay tickets and exorbitant fines, with the government official saying, "Great work!"

"That situation is ridiculous," Oliver said. "The only people who should be that excited about people waiting in line to hand over way too much money are Apple executives. That's the only time."

"Let's recap," Oliver said. "If you get a ticket and you can't pay it, you may get additional fines, lose your license, and eventually your job. And if you're thinking 'Is there any way this situation can be made worse?' Relax, there is."

He then proceeded to detail how municipalities have turned their fine collections over to private probation companies who hit ticket holders with even more fees and charges, including one man who stole a $2 can of beer, who was charged $350 per month to wear a tracking device, making it even harder to pay off his fine.

Eventually that led to the man being jailed multiple times at cost to taxpayers of over $3,500.

"Just think about that. A $2 can of beer caused a $275 fine which the city spent over $3,000 to try and enforce," Oliver exclaimed. "But you know what, it's like they say, 'You've got to spend money to make money to be able to afford to jail people to lose money.' "

"Not only should municipalities not being balancing their books on the backs of some of their most vulnerable citizens, but we cannot have a system that where committing an minor violation can end up putting you in, and I'm going to a legal term of art here: the f*ckbarrel."

Watch the video below, uploaded to YouTube by HBO: