John Oliver: The NCAA doesn't give a sh*t about the student athletes who earn them billions 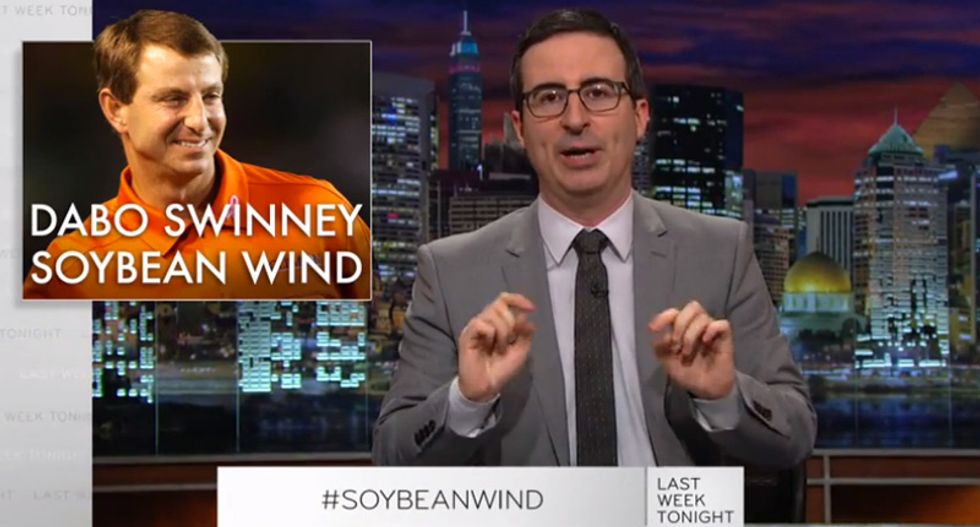 On Last Week Tonight, host John Oliver blasted the NCAA and its affiliate schools for reaping billions of dollars from so-called "student athletes" while providing nothing beyond an education, the right to be screamed at by a millionaire coach, and the threat of losing their scholarship if they become injured.

With March Madness about to begin this week, Oliver notes that the tournament brings in over $1 billion in ad revenue for the NCAA -- more than the NFL realizes from the Super Bowl -- yet student-athlete participants are not paid a cent.

"There is nothing inherently wrong with a sporting tournament making huge amounts of money," he said, "but there is something slightly troubling about a $1 billion sports enterprise where the athletes are not paid a penny."

Oliver shared tales of student athletes who have gone hungry, had to put up with screaming obscenity-filled tirades from coaches who are paid millions of dollars, and are at risk of being declared ineligible should they run afoul of rules contained in a 440-page manual provided by the NCAA.

"A 400-odd page manual of rules," Oliver wondered. "The only other thing that has that many finicky rules should be a sex party at Wes Anderson's house."

While the NCAA, coaches, and college administrators at the non-profit schools praise the idea of the student-athlete - a term created by an earlier NCAA president to avoid paying disability claims should an athlete suffer an injury -- former athletes note what a raw deal they received while the schools are awash in cash as the result of their labors.

Saying America has a "long proud history of  paying aging white men unconscionable amounts of money for screaming at people," Oliver focused his ire on Clemson football coach Dabo Swinney who is paid over $3 million a year.

When asked about compensating college athletes, Swinney said, "As far as paying players, professionalizing college athletics, that's where you lose me. I'll go do something else. Because there's enough entitlement in this world as it is."

"If you find that infuriating, "Oliver explained, "You might like to know that 'Dabo Swinney' is an anagram for for 'Soybean Wind,' which I think is fitting because he's as appealing as an edamame fart."

Oliver went on to propose the hashtag #soybeanwind because, "it is probably something he would be annoyed by and would not want people to know on a wide basis."

Oliver summed up his feelings about the exploitation of athletes, saying, "If it truly is all about the romance of amateurism, that's fine. Give up the sponsorships and the TV deals, stop paying the coaches, and have the teams run by an asthmatic anthropology professor with a whistle."