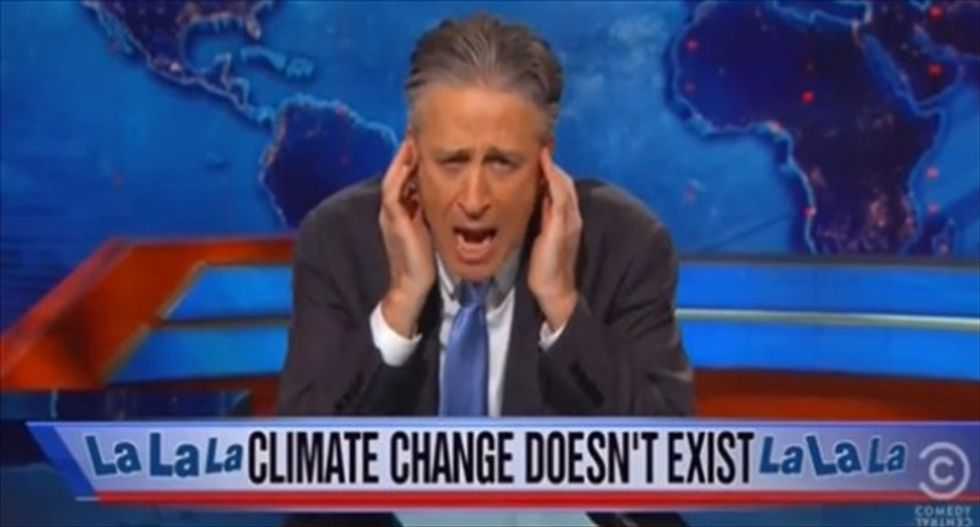 Daily Show host Jon Stewart piled on to the wave of ridicule on Wednesday against the alleged ban on Florida officials using the phrases "global warming" or "climate change."

Stewart showed footage of the meeting last week that saw state director of emergency management Bryan Koon strain to avoid using the terms after being egged on by state Sen. Jeff Clemens (D), sending Clemens' colleagues into fits of laughter.

"Wait, wait, don't laugh," Stewart said after seeing one senator nearly fall out of his seat. "I think that one guy needs the Heimlich. He's our first climate change casualty."

Gov. Rick Scott (R) has denied ordering officials to avoid the phrase, but former state officials have come forward saying they had been forced to use euphemisms like "nuisance flooding" to describe the rising sea level around the state.

While Florida is "too wet," Stewart observed, California was experiencing the opposite problem: a rapidly-declining water supply.

Not only have residents been asked to cut down on watering their plants, he said, but "celebrities wishing to raise ALS awareness will be forced to take the 'Sand Bucket Challenge.'"

But when Stewart pointed out that state officials had not taken any action to cut down on agriculture or meat-related water use -- which constitute the vast majority of the state's water consumption -- he was shouted down by an angry almond and hamburger.

"I got guys on the inside -- your insides," the burger said. "I'm talking about your colon. One word from me and you don't sh*t for a f*ckin' week."

"Oh, I will impact you like a f*cking cement beef balloon," the burger replied.

"I actually ordered that once at Arby's," Stewart conceded.