'Just how we roll': Bristol Palin's fiance pictured playing with baby next to unsecured handgun 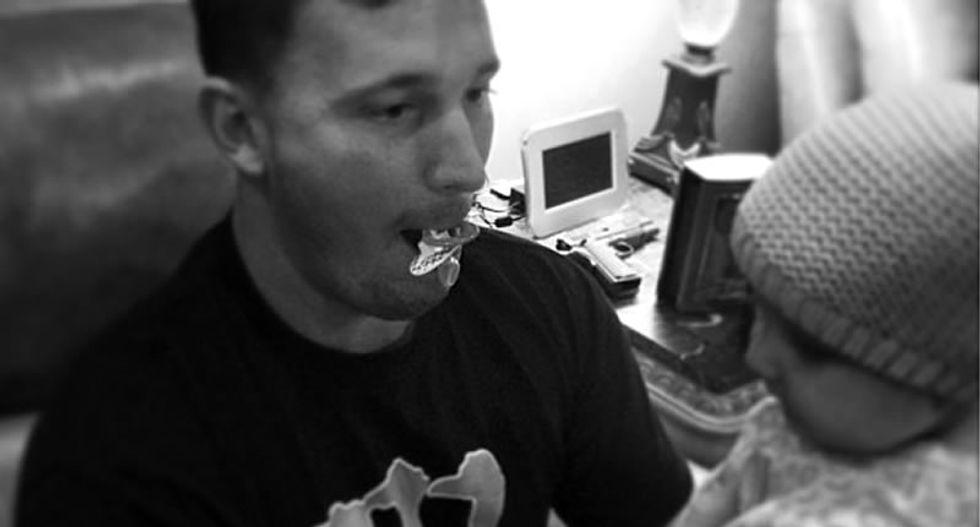 The fiance of former Alaska Governor Sarah Palin's daughter, Bristol, is defending a photograph he posted of himself playing with an infant while a handgun sits on a nearby table, The Daily Mail's Chris Spargo reports.

Dakota Meyer -- a former Marine who was awarded the Medal of Honor by President Barack Obama in 2011 -- had the gun called to his attention by "angi_mann," who wrote "[j]ust love the fact that there is a pistol laying on the little table behind you #hahaha."

"Angi_mann that's just how we roll haha" he replied.

Despite being very active on social media -- he announced his engagement to Bristol Palin on Instagram and Twitter -- Meyer has yet to respond to questions about the image from reporters since the story first broke.

Bristol's mother frequently speaks about how gun owners are mistakenly characterized as being irresponsible. At the 2010 convention of the National Rifle Association, for example, she complained that Hollywood was to blame for depicting gun owners as irresponsible. "Hollywood should look to its own business and clean it up, and then they can tell us how to live our lives," she said.

Meyer is only the third living recipient of the Medal of Honor -- and the first Marine. In 2009, his actions helped save the lives of 36 American and Afghan troops. He met Palin during an appearance on her mother's show, Amazing America.

In a blog post announcing the engagement, Bristol Palin wrote that "[h]e met Tripp during that time, and I've seen him in a few places where our paths have crossed since. He's visited us in Alaska, and I've visited his wonderful family in Kentucky. He's wonderful with Tripp and I'm so proud to be marrying him."