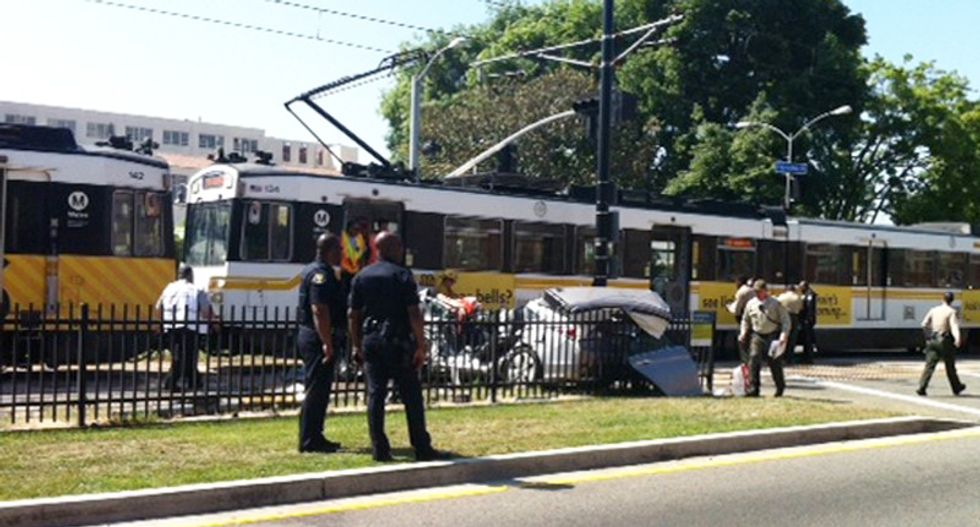 A Los Angeles commuter train that struck a vehicle on the tracks near the University of Southern California campus, is seen in this picture in Los Angeles, California, March 28, 2015. REUTERS/Michael Fleeman

A Los Angeles commuter train struck a car that turned in front of it near the University of Southern California campus on Saturday, derailing into a major thoroughfare and injuring 21 people, two of them seriously.

The car, a silver Hyundai Sonata, was left crumpled and unrecognizable and pinned against a pole alongside the tracks by the collision shortly before 11 a.m. PST, according to a Reuters witness.

The lead train car jumped the tracks, crashing through a metal fence and across a grass-covered median before coming to rest in the middle of Exposition Boulevard.

The operator of the three-car Metro train suffered serious injuries, said Donald Frazeur, assistant chief of the Los Angeles Fire Department. He said the driver of the Sonata, a man who had to be removed from his car with the "jaws of life" tool, was in grave condition.

Nineteen other people suffered minor injuries and ten of them were transported to hospitals for treatment, Frazeur said. Emergency responders set up a triage area on a lawn in front of the Natural History Museum of Los Angeles.

Authorities said an initial investigation showed that both the train and the Sonata were traveling eastbound on Exposition Boulevard when the Sonata turned in front of the train and was struck, dislodging the lead train car from the tracks when it became wedged against the pole.

Officials said the investigation would determine how fast the train was going at the time of the collision, but typically travel through that stretch of the tracks at about 35 miles per hour.

Exposition Boulevard, a main artery through downtown Los Angeles, was shut down in both directions as crews surrounded the white, black and yellow train, which is painted with "Heads up, watch for trains," in large letters on the side.

The crash was the latest among several train and road vehicle wrecks to occur in different parts of the United States over the past few months.

In February, about 50 people were hurt and an engineer fatally injured when a Los Angeles-bound Metrolink train struck a pick-up truck, flipping over three double-decker rail cars and tearing apart the truck.

Three weeks earlier in a suburb of New York City, six people were killed when a Metro-North commuter train struck a car at a crossing and derailed.