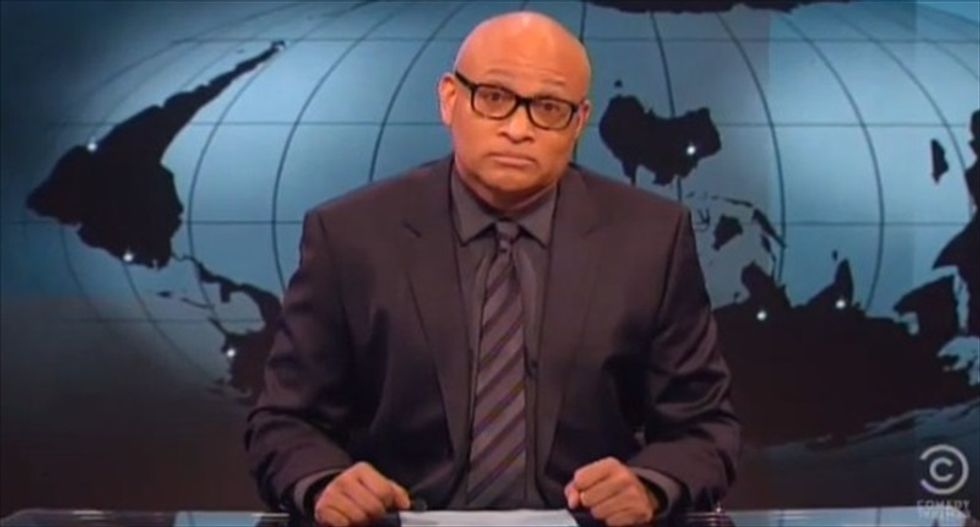 On Wednesday's Nightly Show, host Larry Wilmore and his panel attacked "prosperity gospel" preachers like Creflo Dollar for exploiting their congregations in the name of Jesus Christ.

The "prosperity gospel" is the fastest growing Protestant group according to religious scholar Reza Aslan. It argues that God rewards the righteous with material wealth, and that it is their duty to flaunt it by conspicuously consuming as much as they can afford.

Or, as Wilmore put it, "When did Jesus start a hip-hop label?"

"Have megachurches gone too far?" he asked. "Let me put it this way -- when your church sounds like an evil Transformer, you've gone too far."

After a clip discussing Creflo Dollar's appeal to parishioners for help buying a $65 million Gulfstream jet, Wilmore said, "I don't know if I should be more shocked at a new jet or that his name is 'Creflo Dollar.' It just seems so on the nose -- like a serial killer named 'Jack Knife,' or a bank robber named 'Phillip Z. Bag.'"

"Now, I know what you're thinking," Wilmore continued. "How much do these jet-setting prophets of profit margins make anyway? Creflo is actually at the bottom of the list, and it may be because he's only asking for money. Some of these preachers work hard for the money."

He then showed a clip of a preacher shouting "Take it!" and apparently using the Force to knock down large swaths of his dancing congregation.

During the panel segment, Wilmore spoke to Pastor Bullock, one of the men featured on the Oxygen Network's show Preachers of Detroit. "A lot of the 'prosperity gospel' exploits the notion that people are giving their money directly to God," he said. "So my question to you is, why does Jesus need so much money? Is he cash poor right now? Does he need an addition in Heaven?"

"You know, he does say 'In my Father's house there are many rooms,' so I think there's plenty of good room already," Bullock responded, before turning serious. "You shouldn't feel that people are being exploited, you should know they're being exploited by these congregations. There's a big suction cup and in it's in the sanctuary. It's going from the people to the pastor."

"If you look at these mega-ministries," he continued, "the only one who seems to be getting mega-rich is the pastor and the pastor's family."

"Once you convince your flock that the son of God is a venture capitalist," comedian Bradley Whitford chimed in, "the sky's the limit."

Watch the entire conversation below via Hulu.