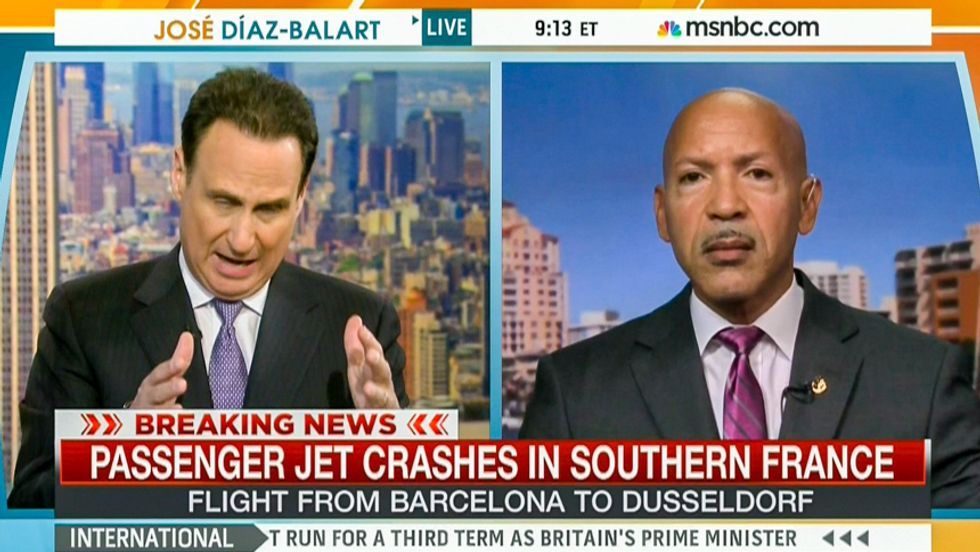 Just hours after the news broke that a Germanwings Airbus A320 had crashed in a remote area of the French Alps on Monday, MSNBC host Jose Diaz-Balart spent five minutes talking to a guest about why the tragedy could be due to malicious "hacking."

Viewers of 24-hour news are used to seeing networks struggle to fill airtime during tragic events. Comedy Central's Jon Stewart mocked CNN for dispatches from what he called the "Duh Room” after Malaysia Airlines Flight 370 last year. And one Fox News host even guessed that AirAsia Flight QZ8501 could have crashed because of the metric system.

But it was MSNBC on Tuesday that may have won the race for baseless speculation following the Germanwings tragedy.

"There's one possibility that no one has brought up, and I wonder could this be a hacking incident?" former commercial pilot Jay Rollins told MSNBC's Diaz-Balart. "This is very similar in my mind to what happened when the U.S. lost that drone over Iran. The same thing, suddenly the aircraft was responding to outside forces."

"And if something like that were going on, it would be very distracting for the pilots," he explained. "I think we'll learn a lot with the black boxes because we need to know what they were seeing in the cockpits since we can't hear what they were thinking otherwise."

Rollins said that the plane's descent was "worrisome" because "it makes me think about hacking, some sort of interference into the computer system."

"And there's been discussions about this for sometime now. And we still haven't gotten any resolution whether these aircraft are protected from that or not."

Diaz-Balart wondered if the pilot and co-pilot could take manual control of a plane if the problem was "manmade or the computers just malfunction."

"This is the brave new world that we're entering as we use more and more computerization in an age when people are hacking," Rollins insisted. "In a fully computerized electrical setup like what you see in the Airbus and also the Boeing 787, these are aircraft that are controlled by computers."

"So when the pilot puts in any sort of change for the aircraft flight controls, it first goes through the computer that mediates it, then tells the controls what to do. I find it problematic actually."

"So to distill this, there is no manual override on the A320?" Diaz-Balart pressed.

"I cannot absolutely confirm that at this point," Rollins admitted. "But I know that it is an electrically driven aircraft. And therefore, you would not have a hydraulic override if the plane for some reason locked up."