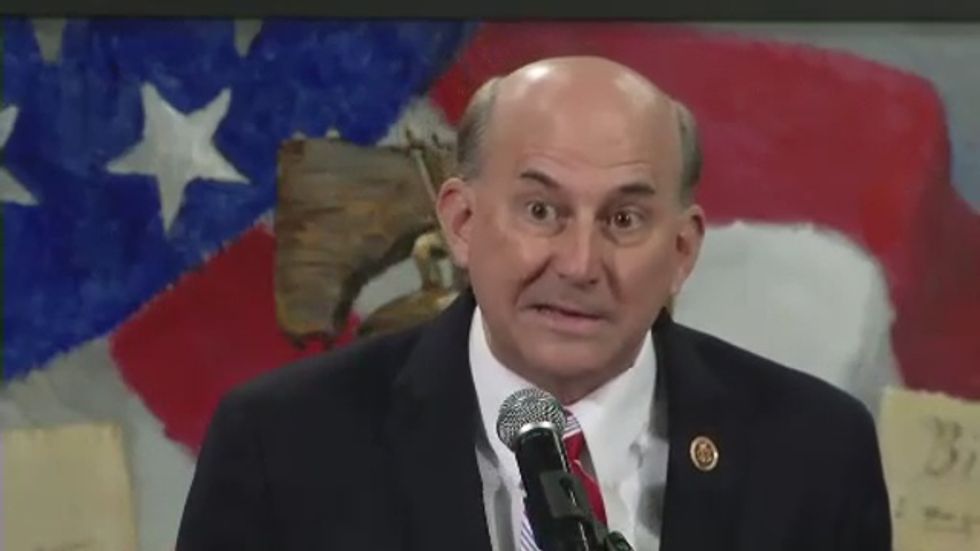 So his statement to The Hill on Thursday indicating that he is at least considering it should be cause for celebration.

When asked if he was considering supporting his fellow Texas Republican's burgeoning candidacy, Gohmert said, "Ted is a good friend and would be an outstanding President; however, I haven't ruled out an exploratory committee myself."

But we here at The Raw Story think the state "Legislator of the Year" should get a chance to spread his message on a bigger platform. Here's a few reasons why:

Full disclosure: we go back with the Tea Party congressman. Earlier this year, we posted audio of Gohmert saying "Republican females" scuttled legislation banning abortions after the 20-week mark because the bill did not include an exemption for rape victims.

Gohmert then accused us of trying "to take anything a Christian says and twist it" in an interview with Breitbart.com.

"I have nothing but respect for the females in our conference," he said in his defense. Of course, other news outlets corroborated our story.

2. His support for other "females"

Gohmert regularly attacks undocumented immigrants, blaming them for, among other things, committing rape on a staggering level.

"They've committed at least 7,695 sexual assaults," he said on the House floor last July. "You want to talk about a war on women? This administration will not defend the women of America from criminal aliens! By the thousands, and hundreds of thousands!"

On the reproductive rights front, Gohmert isn't just pro-life -- he's pro-life even when the fetus lacks a working brain.

When a woman testified before a House Judiciary Subcommittee in May 2013 that the 20-week abortion ban would have forced her to "carry to term and give birth to a baby whom the doctors concurred had no chance of a life and would have experienced near-constant pain," Gohmert rejected her reasoning.

"These are ethical issues, they’re moral issues, they’re difficult issues, and the parents should certainly be consulted," he said. "But it just seems like, it's a more educated decision if the child is in front of you to make those decisions."

And last January, he said women were the reason he entered politics -- specifically, single mothers accused of committing welfare fraud.

"One woman had had 15 kids, didn't even know where they all were, that was the most that I ever dealt with," he told his fellow legislators. "It began to really eat away with me that in the 60s the federal government, desiring to help poor moms who were dealing with deadbeat dads, decided, 'We'll help, we’ll give a check for every child you can have out of wedlock.'"

3. Who better to spearhead the GOP's Latino outreach for 2016?

While Republican leaders have pushed party members to court the Latino electorate after Mitt Romney's loss in the 2012 election, Gohmert was asking them to think of the big picture, and kill immigration reform that is otherwise enjoying support nationwide -- for immigrants' own good, of course.

"If we don't communicate that message we could pay for it," he said in July 2013. "We could in the short term, but in the long term, I think you will see people start waking up and go, 'Wow, I'm Hispanic, these Republicans really like me.'"

Gohmert wants to connect with Hispanics so much he called for the use of military force in Mexico to stop an influx of child immigrants from other Central American countries. How's that for diplomacy?

4. Why limit it to Latino outreach?

Now that we think about it, Gohmert's brand of compassionate conservatism extends ... well, apparently only to people who "cling to their God and their guns."

But we're sure that when he asks the black community to support discrimination against LGBT Americans, pushes tax hikes on welfare recipients, and calls same-sex marriage the harbinger of a civilization's demise, his charm will win over Mr. and Mrs. (or Mr. and Mr., or Mrs. and Mrs.) Non-Christian Conservative. Especially in Indiana.

From Lou Dobbs to President Barack Obama to Attorney General Eric Holder, Gohmert has shown an ability to connect with people.

And his appeal isn't just widespread among non-GOP members. Here's a couple of testimonials from fellow Republicans:

And if you can't trust Republicans, who can you trust?