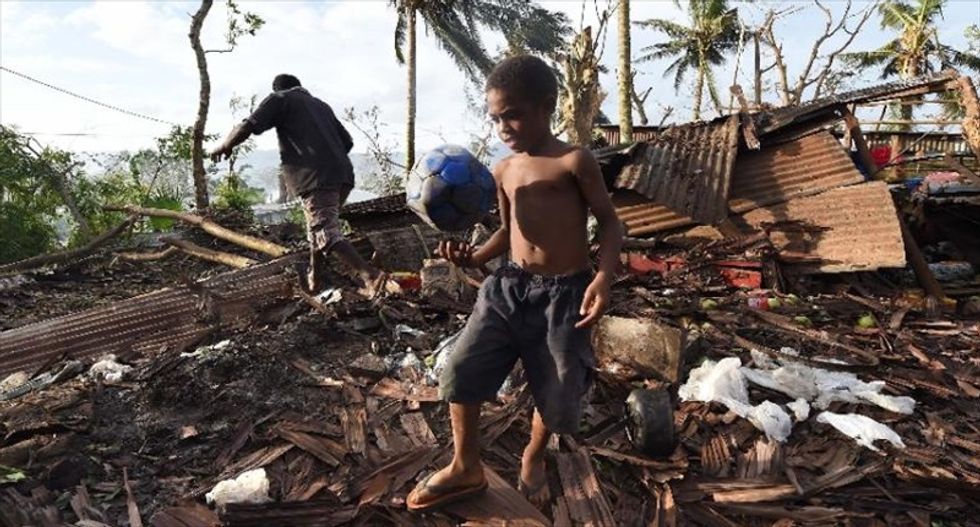 A young boy kicks a ball as his father searches through the ruins of their family home in Port Vila, Vanuatu on March 16, 2015. Photo by Dave Hunt for Agence France-Presse.

Vanuatu warned it faces imminent food shortages as accounts emerged of huge damage to a large outer island, days after one of the fiercest cyclones on record pummelled the Pacific archipelago.

Relief agencies say conditions are among the most challenging they have faced, with some areas still inaccessible and concerns that disease and a lack of clean water could add to a revised toll of 11 confirmed fatalities.

Communications were still down to many of Vanuatu's 83 islands, most only accessible by boat, and Prime Minister Joe Natuman said Tuesday it would be at least a week before authorities had a better sense of the destruction.

President Baldwin Lonsdale has appealed for the world to help after Severe Tropical Cyclone Pam roared ashore on Friday night.

On the streets of the capital, Port Vila, residents began clearing metal roof sheeting from the roads and used machetes to hack through fallen trees as they tried to rebuild their lives.

The UN Office for the Coordination of Humanitarian Affairs lowered its earlier death toll of 24 to 11, citing figures from the Pacific nation's disaster office which included five from Tanna Island.

The scale of the disaster became clearer with the first teams of aid workers reaching Tanna, home to 30,000 people. It is some 200 kilometres (125 miles) south of the capital Port Vila, itself badly damaged.

Australian Foreign Minister Julie Bishop said reconnaissance by the country's military showed that "more than 80 percent of houses and buildings have been partially or completely destroyed" in Tanna.

"Not only buildings flattened, but palm plantations, trees. It's quite a devastating sight."

Natuman said while initial assessors had been able to enter the eastern and western parts of the island chain, northern and southern areas were still largely unaccessible.

"It'll be at least a week or two," he told reporters at Port Vila airport.

"Right now we are sending teams to do ground assessments to see how many people are homeless."

International aid shipments have started arriving, including from Australia, Britain and the EU have pledged aid to the Pacific nation.

On Tuesday, French President Francois Hollande pledged to step up France's relief efforts in "the coming days, to respond to the urgency of the situation".

But with many outlying areas still inaccessible, Benjamin Shing, from Lonsdale's office, said survivors are still in danger of running out of food.

"The first week we are relying on the fact that the food crops are still edible ... but after the first week we'll need to get some rations on the ground," he told the Australian Broadcasting Corporation.

With crops wiped out, Shing feared the worst for a country that largely relies on subsistence farming, warning "there might be a lot of fatalities".

At least 3,300 people have sought refuge in 37 relief centres, according to the UN, which also said figures were found to be inaccurate due to inconsistent registration processes.

Among them was Melissa Song, a 22-year-old who had taken refuge in a hotel along with nine members of her family, including three children and an infant.

"We've had no sleep since Thursday," she told AFP.

Local woman Sale Chilia said residents living in Mele, a village two kilometres south of Port Vila, were starting to worry about where they could find their next meal.

"We only have the leftovers now," she said.

In the capital Port Vila, access to water and electricity was partially restored after the storm brought down an estimated 80 percent of power lines and damaged most homes.

Personal belongings, household items, mattresses and clothes were spread out on the ground and hung on washing lines as people dried them out.

Samuel Toara, 25, thought he was going to die as he hid in the pitch black of his home as the storm barrelled ashore.

"The cyclone sounded like a big plane flying very low," he told AFP, describing how part of the roof blew off in the tempest.

"The rain and wind was like white smoke and it flooded up to my knee. But I told the boys, don't worry about the water," he said. "As long as we survive."

Vanuatu is no stranger to cyclones, which are common in the South Pacific, but locals said Pam felt worse than Cyclone Uma in 1987, which killed 30 people.

UNICEF has estimated that 60,000 children have been affected by the cyclone and virtually all schools were closed.