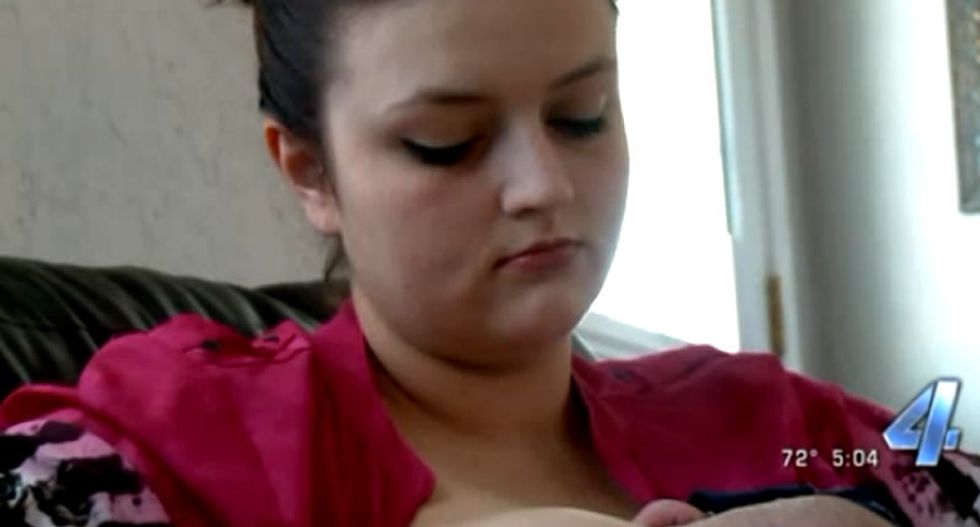 The Oklahoma City mother of an 8-week-old said she is afraid to breastfeed in public again after she was humiliated by employees in a local YMCA, KFOR reports.

Tiffany Hoag told the station that she was nursing her 8-week-old son in the women's restroom of the Earlywine YMCA when staff members asked her to leave. Oklahoma law states that "mothers have the right to breastfeed anywhere they have a right to be."

"I went to the women’s locker room and changed him, then he started to get a little bit fussy, so I started to nurse him," Hoag said. "I was really embarrassed and upset because people were looking, and he was crying because he was still hungry."

There was another mother nursing her child in the locker room. A YMCA staff member came in and escorted her out. "The next thing you know," Hoag said, "she comes back for me and says, 'You can't be in here. I'm going to have to ask you to leave."

Hoag told KFOR that she was then escorted to what she was told was the family locker room. "It was dirty, towels on the floor," she said. "It's a toilet, a shower, a seat, and a sink."

The YMCA released a statement in which it claimed that Hoag's removal was a misunderstanding. "We believe this was likely an unfortunate mistake with our staff member misinterpreting our locker room policy, which states that children are not allowed in adult locker rooms," the statement read.

"We are looking into this particular incident further with the staff members involved in an effort to ensure that no other moms have this happen in the future," it continued. "We are very sorry that this new mom had a negative experience and will continue to train our staff to understand that moms can breastfeed anywhere they would like to do so in our facilities."

Watch a report on the incident via KFOR below.