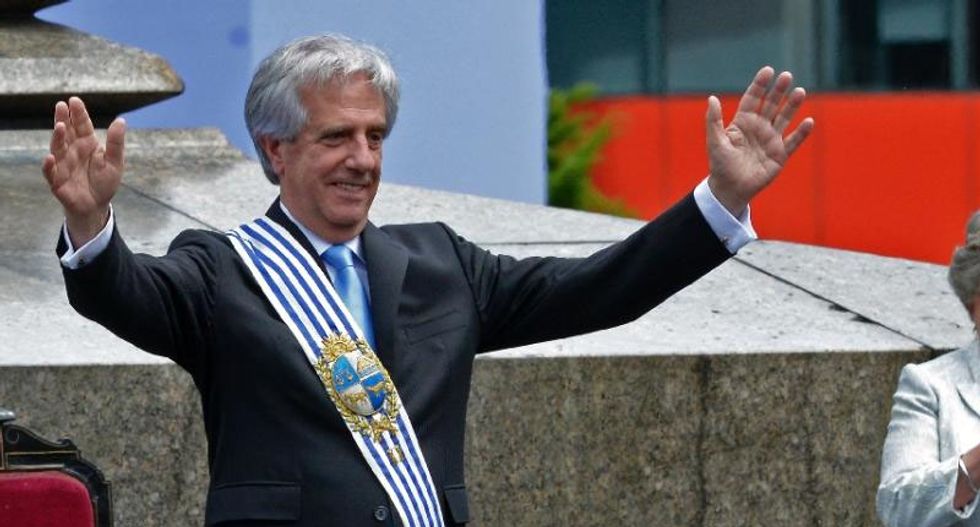 Tabare Vazquez was sworn in as Uruguay's new president, returning to office a decade after first leading the left to power and drawing a curtain on folksy farmer Jose Mujica's colorful rule.

After taking the oath of office before the National Assembly, Vazquez called for a national dialogue, at a time when the parties that long dominated Uruguayan politics, the Blancos (Whites) and Colorados (Reds), are reeling from a string of Broad Front (FA) victories.

"We can and we must analyze and dialogue respectfully together on the different paths to achieve the best public education for our people, to have quality health care for all, dignified housing," he said.

Vazquez, a cancer doctor, also promised improvements in infrastructure, social welfare and education, and announced a war on alcohol.

During his first presidential term from 2005-2010, he campaigned hard against tobacco.

The 75-year-old Vazquez cuts a more sober figure than the outspoken Mujica, and has criticized some of his reforms -- including a still-unimplemented plan to sell marijuana at pharmacies, a key element of the new cannabis law.

In a nationally televised speech, new president failed to mention the marijuana legislation that was approved in December 2013.

Mujica, a former guerrilla fighter also known for legalizing gay marriage and abortion, handed the presidential sash back to his predecessor and FA party colleague, reversing their roles from five years ago in this country that bars presidents from serving consecutive terms.

The two allies have clashed at times within the FA, and Vazquez announced his new cabinet in December without consulting Mujica.

Vazquez won 53.6 percent of the vote in a November 30 presidential run-off.

Known for his spartan lifestyle, his salty commentary and his devotion to his three-legged dog, Mujica steps down more popular than ever, with an approval rating over 60 percent.

The 79-year-old farmer attracted international attention as much for his lifestyle as his policies.

Eschewing the trappings of power, Mujica insisted on living on his modest farm and driving around in a beat-up Volkswagen Beetle. He also gave most of his salary to charity.

He began his final hours in office with his habitual morning routine, taking a walk then climbing onto his tractor to do some farmwork before changing into a grey suit and hopping into his Beetle to go to Independence Square in the nearby capital Montevideo.

Throughout the handover ceremony, Mujica's fans chanted his nickname, "Pepe."

"He's the best president we've ever had," said Charo Baroni, a 66-year-old housewife who was in the crowd for the ceremony.

"I'm sorry to see him go. Tabare is good too. But Pepe is Pepe."

Mujica, who spent 14 years in prison for fighting with the rebel Tupamaros National Liberation Movement during the turbulent 1960s and 70s, never hewed to the traditional presidential script.

Under Mujica, Uruguay became the first country in the world to fully legalize marijuana all the way from the cannabis field to the joint, setting up a regulated market for cultivation, sales and use.

The leader, who will now become a senator, was also known for his candid -- and sometimes less-than-diplomatic -- remarks.

A live microphone once caught him saying: "This old hag is worse than the one-eyed guy."

It was a reference to Argentine President Cristina Kirchner and her late husband and former president Nestor Kirchner, who had a lazy eye.

Critics point to Mujica's shortcomings, including his failure to implement education reform, even as the country's academic achievements fell.

Vazquez inherits a country facing a tougher economic climate than when he first took office in 2005.

Uruguay has enjoyed 12 years of unbroken growth and record-low unemployment, but the agricultural dynamo is now struggling to deal with the end of the global commodities boom.

Inflation is now more than one point above the official target range of three to seven percent, and Uruguay's giant neighbors Argentina and Brazil are both experiencing economic downturns.

In his speech, Vasquez also promised to keep inflation within the target range of three to seven percent and to control a growing fiscal deficit.