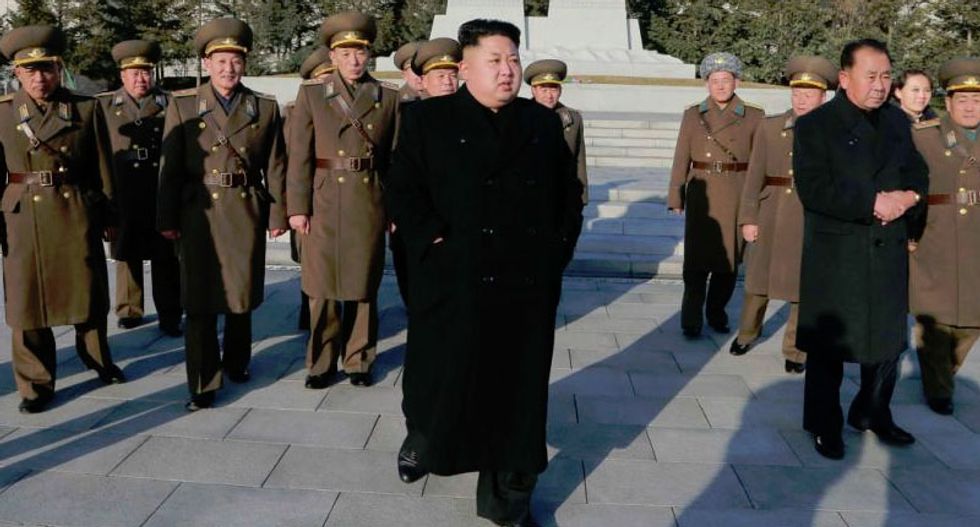 North Korea fired two short-range ballistic missiles into the sea and vowed "merciless" retaliation Monday as the US and South Korea kicked off joint military drills denounced by Pyongyang as recklessly confrontational.

The annual exercises always trigger a surge in military tensions and warlike rhetoric on the divided peninsula, and analysts saw the North's missile tests as a prelude to a concerted campaign of sabre-rattling.

"If there is a particularly sharp escalation, we could see the North orchestrating some kind of clash on the maritime border," said Jeung Young-Tae, an analyst at the Korea Institute for National Unification in Seoul.

The missile launches came with a stern warning from the nuclear-armed (North) Korean People's Army (KPA) that this year's military drills would bring the peninsula "towards the brink of war".

The South's defence ministry said the Scud missiles were fired from the western port city of Nampo and fell into the sea off the east coast -- a distance of nearly 500 kilometres (310 miles).

"We will respond sternly and strongly to any provocation," Kim said.

Japan said it had issued a strong protest to the North given the danger such missile launches posed to aviation and shipping, while China urged the two Koreas to exercise restraint.

Missile tests have long been a preferred North Korean method of expressing anger and displeasure with what it views as confrontational behaviour by the South and its allies.

"The situation on the Korean peninsula is again inching close to the brink of a war," a spokesman for the KPA General Staff was quoted as saying Monday by the North's official KCNA news agency.

"The only means to cope with the aggression and war by the US imperialists and their followers is neither dialogue nor peace. They should be dealt with only by merciless strikes."

North Korea has threatened attacks, including nuclear strikes, on the US before, although it has never demonstrated a missile capability that would encompass the US mainland.

The largest element of the two South Korea-US drills that began Monday is Foal Eagle, an eight-week exercise involving air, ground and naval field training, with around 200,000 Korean and 3,700 US troops.

The other is a week-long, largely computer-simulated joint drill called Key Resolve.

Seoul and Washington insist the exercises are defence-based in nature, but they are regularly condemned by Pyongyang as provocative rehearsals for invasion.

In a statement later Monday the North Korean Foreign Ministry labelled the start of the drills an act of "intolerable aggression" and said the North was ready to wage "any form of war" that the US chooses.

In January the North offered a moratorium on further tests if this year's joint drills were cancelled -- a proposal rejected by Washington as an "implicit threat" to carry out a fourth atomic detonation.

Analyst Jeung said Pyongyang was unlikely to conduct a fourth test just to protest against the exercises.

"Nuclear tests carry more significance than that," he said, noting that the North's testing schedule was mainly driven by technical development.

"On the other hand, there is the chance of a mid- or long-range missile test," Jeung told AFP.

"I would say that a demonstration that it could deliver a nuclear warhead would be more threatening to the world than an actual nuclear test," he added.

A new research report by US experts published last week estimated that North Korea could be on track to have an arsenal of 100 nuclear weapons by 2020.

In a further sign of rising tensions, the North Korean state-run website Uriminzokkiri warned Monday of a fierce response to any attempt by South Korean activists to float anti-Pyongyang leaflets across the border by balloon.

"The response might not just be a few shots of gunfire but cannons or missiles," the website said.