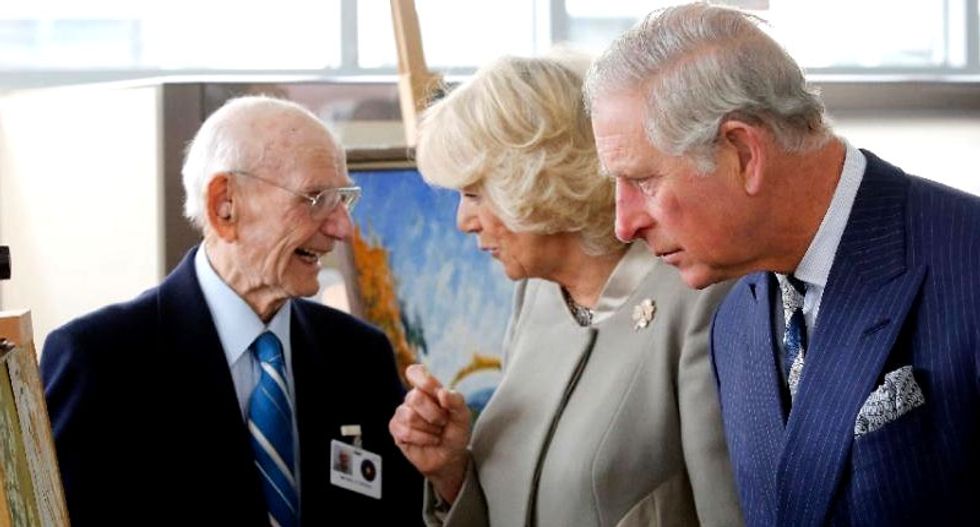 Britain's Prince Charles (R), Prince of Wales, and his wife Camilla, Duchess of Cornwall, speak to US military veteran Michael Furgala in the art studio as they pay a visit to the Armed Forces Retirement Home in Washington, DC, on March 19, 2015 (AFP Photo/Jonathan Ernst)

US President Barack Obama welcomed Prince Charles and his wife Camilla to the White House on Thursday, joking that Americans liked the British royals more than local politicians.

"I think it's fair to say that the American people are quite fond of the royal family," Obama told the Prince of Wales and heir to the British crown in the Oval Office.

"That's awfully nice to know," the prince responded, as a gang of photographers clicked away in a building royal soldiers once burnt to the ground.

The royals are on a four-day visit to the United States designed to underscore "the special relationship" between the two nations.

Earlier in the day the royal couple chatted with US military veterans, then dropped by a school that caters to newcomers to America.

The royal couple stopped by the Armed Forces Retirement Home, which includes a cottage where Civil War president Abraham Lincoln spent his summers, and the Carlos Rosario school for adult immigrants.

The Prince of Wales and Duchess of Cornwall first stood on the porch of Lincoln's Cottage, where they learned about its history and restoration, but did not wander into the spacious rooms inside.

Lincoln wrote the Emancipation Proclamation at the hilltop cottage where he lived for much of the Civil War, commuting daily to the White House on horseback.

This year marks the 150th anniversary of the Civil War and the assassination of Lincoln, whose imposing memorial the couple visited Wednesday.

Charles and Camilla then mingled with some of the 450 elderly veterans who reside at "The Soldier's Home," as it is commonly called, situated amid rolling parkland in the heart of the US capital.

"We almost consider them our royal family, because we don't have one," said Vietnam War veteran Michael Martinez, 72, an amateur painter who discussed his acrylic landscapes with Charles, a watercolorist.

At the Carlos Rosario Public Charter School, Charles chatted with Latin American and Ethiopian immigrants striving to learn English as they begin new lives in the United States.

"English not easy! Lots of practice!" said the 66-year-old heir to the British throne by way of encouragement, as he wished good luck to a class.

The school is located in the diverse Columbia Heights district, where longtime African American residents rub shoulders with Salvadoran immigrants and young white professionals from all over the United States and the world.

Camilla meanwhile sat in on a meeting of Washington's sexual assault response team. The duchess, 67, has long had a special interest in the welfare of victims of rape and sexual exploitation.

On Wednesday they visited Mt Vernon, the historic home of first US president George Washington, who successfully led the revolt against British colonial rule.

Prince Charles described the visit fondly when chatting with Obama.

On Friday, Charles and Camilla proceed to Louisville to inspect community projects in the Kentucky city, before completing their four-day American stay.