Obama says US to 're-assess' options after Netanyahu win 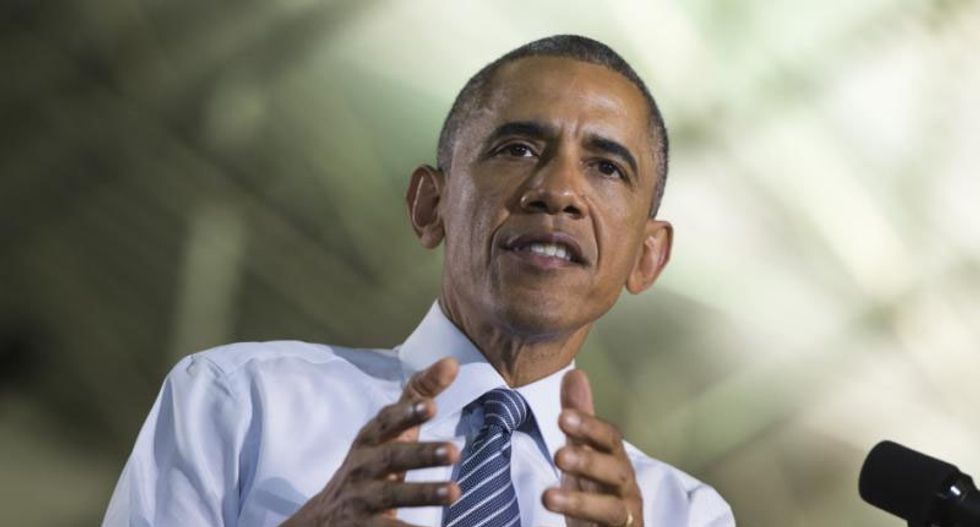 President Barack Obama on Thursday warned Israel's Benjamin Netanyahu that Washington will "re-assess" its policies after the prime minister's election win called into question crucial US diplomatic cover for Israel at the UN.

Two full days after Netanyahu's shock election victory, the White House said Obama called the Israeli leader to congratulate him -- though the message was decidedly lukewarm.

Obama warned that the veteran Israeli leader's last-minute campaign pledge to oppose the creation of a Palestinian state and comments about Israeli Arabs voting in "droves" would force a rethink in Washington.

The US president called to congratulate Netanyahu "on his party's success in winning a plurality of Knesset seats," the White House said.

"The president told the prime minister that we will need to re-assess our options following the prime minister's new positions and comments regarding the two state solution," an administration official said on condition of anonymity.

Even as Netanyahu scrambled to deny he had ruled out the creation of a Palestinian state -- long the starting point for Middle East peace efforts and a cornerstone of US policy -- the White House indicated it could withdraw its unwavering support for Israel at the United Nations.

The United States -- a veto-wielding member of the UN Security Council -- has opposed moves at the UN to recognize a Palestinian state, saying that must be part of a negotiated peace deal.

"Steps that the United States has taken at the United Nations had been predicated on this idea that the two-state solution is the best outcome," said White House spokesman Josh Earnest.

"Now our ally in these talks has said that they are no longer committed to that solution. That means we need to re-evaluate our position in this matter, and that is what we will do moving forward."

Asked whether Washington would remove its diplomatic cover at the UN, a senior US official said that, while no decision has yet been made, "we haven't taken the option off the table."

Such a move would represent a major inflection point for US-Israeli relations, the likes of which has not been seen in years, or perhaps decades.

It is now more than 30 years since then president Ronald Reagan allowed anti-Israel resolutions to pass at the UN after Israel bombed Iraq's nuclear facilities.

Netanyahu on Thursday emphatically denied setting himself in opposition to decades of US policy by going back on his commitment to seeking a Palestinian state.

"I didn't retract any of the things I said in my speech six years ago, calling for a solution in which a demilitarized Palestinian state recognizes a Jewish state. I said that the conditions for that, today, are not achievable," Netanyahu told Fox News as he took to the US airwaves.

Israel would "need the recognition of (a) Jewish state and real security in order to have a realistic two-state solution," he told NBC News.

The Palestinians would also need to cut ties with Hamas militants running the Gaza Strip and engage in "genuine" peace talks, Netanyahu added.

Even if denied or retracted, Netanyahu's comments could have a lasting impact on efforts to end the long Middle East conflict.

Palestinian president Mahmud Abbas said it was clear a two-state solution would be impossible with a new government led by Netanyahu.

"Netanyahu's statements against a two-state solution and against a Palestinian state... are proof, if correct, that there is no seriousness in the (future) Israeli government about a political solution," Abbas said.

The Palestinians would continue to push for legitimacy on the international stage, Abbas said. "It is our right to go to anywhere in the world to achieve international legitimacy," he said.

The Palestinians will formally join the International Criminal Court on April 1 and have vowed to seek action from the very first day for alleged Israeli war crimes during last year's conflict in the Gaza Strip.

Conceding defeat, Herzog quickly ruled out any participation in a unity government with Netanyahu, saying going into opposition was "the only realistic option."

Results released by the Central Elections Committee on Thursday confirmed Likud had taken 30 of the 120 seats in parliament to 24 for the Zionist Union.

Right wing and religious parties -- including the center-right Kulanu -- took 67 seats to 53 for the center-left and Arab parties.

The Joint Arab List made a strong showing, becoming the third-largest faction in parliament, with 13 seats.