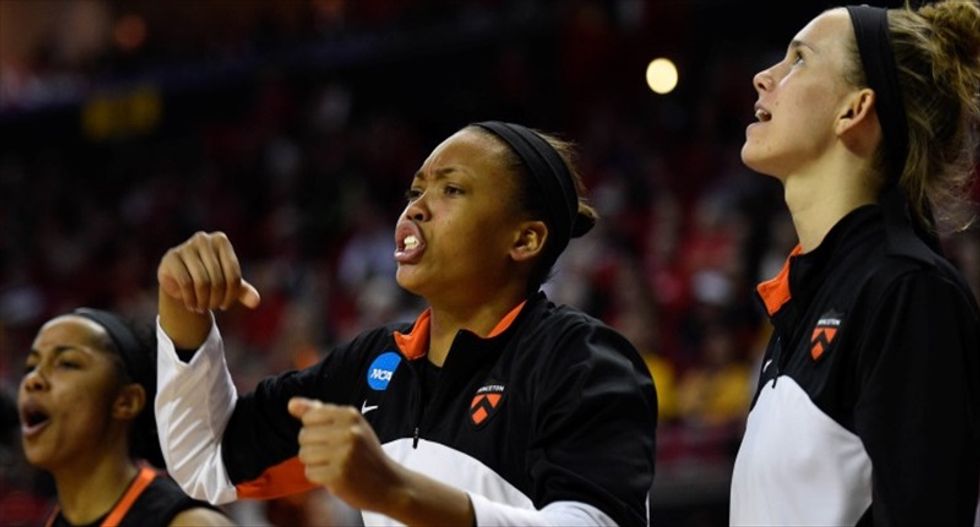 Mar 23, 2015; College Park, MD, USA; Princeton Tigers forward Leslie Robinson (center) reacts to a play on the court against the Maryland Terrapins during the second round of the women's NCAA Tournament at Xfinity Center. Photo by Derik Hamilton for USA TODAY Sports.

An eight-minute voicemail was received at the University of Maryland athletic department offices on Monday afternoon in which a woman said a man was driving on the College Park, Maryland, campus with a Glock handgun in his possession, the newspaper reported, citing a person with knowledge of the threat.

The caller linked the man's appearance on campus to the game and Leslie Robinson, a freshman forward at Princeton and the daughter of Michelle Obama's brother, USA Today said.

Robinson was not told of the threat, but Princeton coach Courtney Banghart was aware of it, the paper said.

In addition to normal game security, undercover security officers were near the Princeton bench. Secret Service officers also were in the arena due to the presence of Supreme Court Justices Sonia Sotomayor and Elena Kagan, USA Today reported.

Obama attended Saturday's first-round game between Princeton and Wisconsin-Green Bay but was not at Monday night's game.