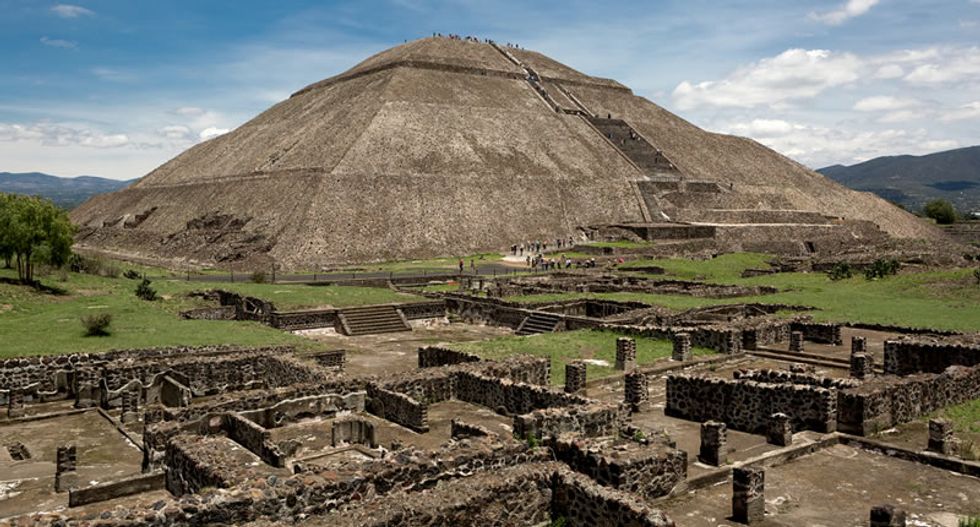 The Pyramid Of The Sun In Teotihuacan (Shutterstock)

According to a recent study in the Proceedings of the National Academy of Sciences, the ancient and diverse Mesoamerican civilization Teotihuacan collapsed not because of war, drought, or famine -- but because of a "corporate mode" of governance that involved "ostentatious expressions of inequality and wealth."

In the study, Linda Manzanilla of the Universidad Nacional Autonoma de Mexico argued that the "contrast between the corporate organization at the base and top of Teotihuacan society and the exclusionary organization of the neighborhoods headed by the highly competitive intermediate elite introduced tensions that set the stage for Teotihuacan’s collapse."

Teotihuacan was a powerful cultural center in Mesoamerica between the first and sixth centuries AD because of its diversity -- two volcanic eruptions had forced the civilization to integrate substantial populations of refugees who brought with them new trades that bolstered the economy.

Manzanilla found that the majority of these refugees settled on the outskirts of Teotihuacan, with the more central areas being reserved for the native elites. However, as the former refugees became integrated into Teotihuacan society, they began to acquire wealth, becoming what Manzanilla called "an intermediate elite."

It is the tensions between this "intermediate elite" and the corporate-minded native elite that led to the civilization's downfall.

"The major ritual and administrative buildings along the Street of the Dead were set on fire in A.D. 550, and the sculptures inside palatial structures, such as Xalla, were shattered," Manzanilla wrote.

"No traces of foreign invasion are visible at the site. We interpret this event as a revolt against the ruling elite, perhaps a response to a late intervention on the part of the state to control the entrepreneurial movements of the intermediate elite."