'Our office was bombed!': Anti-abortion group says it needs money to clean up glitter 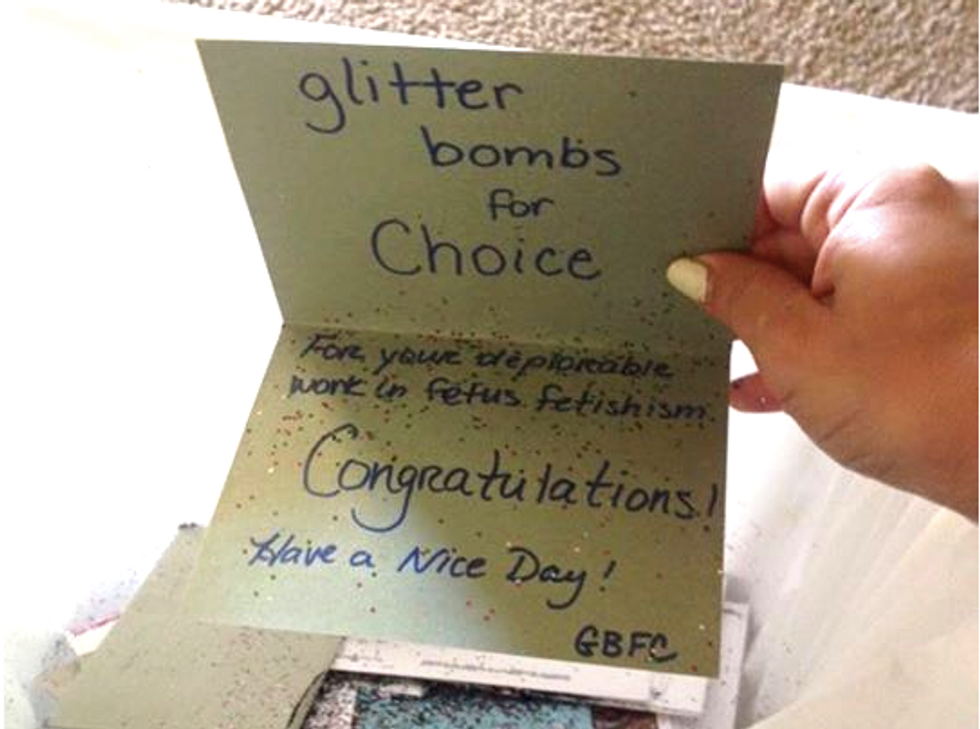 Glitter bomb sent to And Then There Were None (Facebook.com)

Anti-choice website LifeNews is begging its followers for donations after its office was bombed -- with glitter.

Jezebel reported that LifeNews sent out an email last weekend beseeching its supporters for financial help in the wake of the "bombing."

The fundraising plea was headed: "Subject: URGENT! Our office was bombed, we need your help!" The group repeated the pun twice more before finally saying that pro-choice activists Glitter Bombers for Choice (GBFC) mailed their office a letter that sent brightly colored glitter flying in all directions when it was opened. Included was a note that said, "Congratulations, you've earned this for trying to deny choice to women. Love, GBFC."

LifeNews said in its plea to donors, "While these glitter bombs are insulting and intimidating rather than life-threatening -- they contain an inspiring reminder: the pro-abortion side knows LifeNews is effective!"

"Please help LifeNews today continue our battle against abortion and the culture of death," the email said. "We can continue reaching millions of people around the world with your gift."

Anna Merlan at Jezebel noted, "According to the National Abortion Federation, abortion clinics have been bombed 42 times since 1977, suffered another 99 attempted bombings, at least 550 incidences of abortion providers and employees being stalked, as well as the 100 or so times clinics were sprayed with butyric acid (causing respiratory distress and mass hospital visits for both patients and staff). Oh yeah, and the eight people who have been murdered: four doctors, two employees, a security guard, and a clinic escort, gunned down at clinics, at their homes, or, in Dr. George Tiller's case, as he served as an usher at church."

GBFC has sent packages with sparkly, hard-to-clean-up payloads of glitter to several other anti-choice organizations, including the group And then There Were None and Texas Right to Life, which called the tactic "an antic as weak and laughable as their movement," and said that pro-choice activists are out to "silence" the anti-choice movement.

"Maybe if your vocal cords got filled with glitter dust?" Merlan suggested. "Seems unlikely, though."

A company called Glitter Grenade has been offering the service since early 2015, urging users to "Make your friend's day! Or anonymously ruin your enemy's!" for the price of $9.99.

The website includes testimonials from glitter bomb senders like Maggie in Tampa, Florida, who wrote, "It was so funny to see my boss with glitter all over his shirt and desk. The next day he was still trying to get rid of it. It’s almost impossible, LOL!!"

And some receivers like the person who wrote, "This shit fucked up my day...it’s still all over my car seat. I wanna know who was the motherfucker who sent me this!!!"