"Pissed Off Rednecks Like Me" is a racist song. There's no way around it. 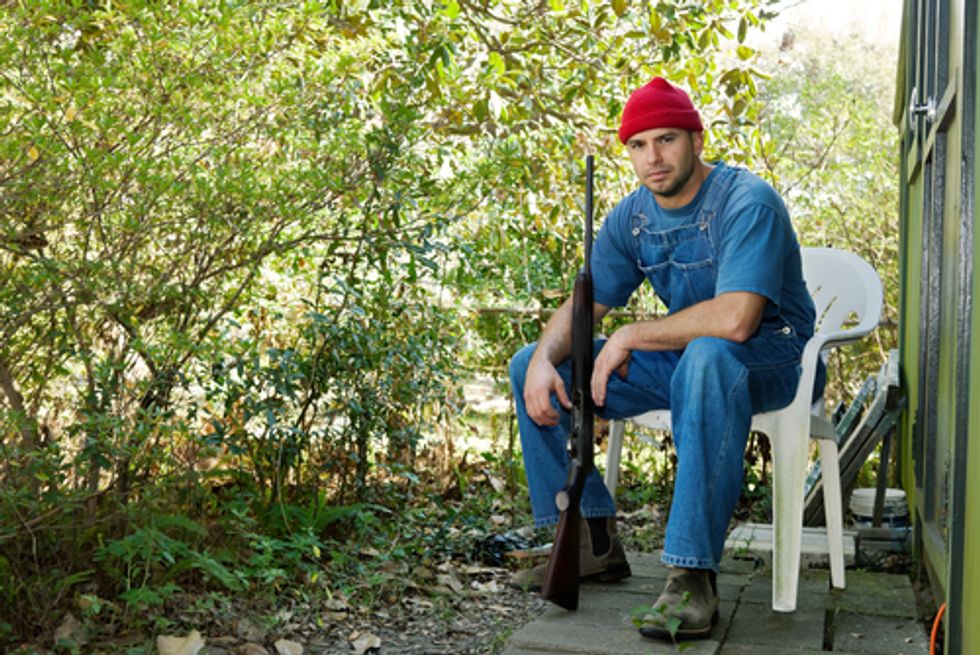 After a racist incident like the SAE frat boys singing a racist song---one which is tied into their heritage as a Confederate-sympathizing fraternity---at the University of Oklahoma, there's generally a scramble to minimize this sort of thing, suggest that it's an outlier and not any reason to believe that racist attitudes are common, or, as they did on Morning Joe, try to find a way to suggest this problem is a "kids these days" problem or the fault of black people themselves. But, if you want evidence of how dirt-fucking-common just straight up racism is, look no further than this song "Pissed Off Rednecks Like Me" by Jamie Jones. The song has gone viral and is selling well on iTunes, though most of the material I've read about it is promotional and is likely exaggerating its popularity. Still, that it is doing well is not in dispute.

The song is about how conservative white people don't have real problems so they have to make them up in order to justify their feelings of victimhood. Or that's my interpretation, though it's clear that Jones and his fans do not see it this way and are dumb enough to think the problems he complains about in the song are things that happen in the world. Like this:

Mr. stick-head politicianI got some news for youIf you want to comeTryin' to take my gunSon you better be bulletproofAnd don't try to tell my childrenWhen and where to pray

Yep, no one is trying to take his gun away and they certainly aren't banning his children from praying. Indeed, from what we can tell from the demographic information, the likelier story is his kids aren't praying because they see through Dad's pious bullshit. There's a lot of other mythical oppressions he lays out, including the myth that Obamacare is stealing medication from old people (read: taking medical care from older, white people and giving it to younger people of color, which is not happening---there's enough to go around), the false claim that people are on welfare and refusing to work (in fact, most people on assistance work but just don't make enough to make ends meet), that sort of thing. But most of the time on places like Fox News and whatnot, they are careful to avoid being overtly racist, knowing that audiences will fill in the blanks for them. That allows the myth that racism is dead to persist, because it's conveyed in most spaces through raised eyebrows and implication.

But not with this dicknozzle! No, he goes there:

No, I won't push one for EnglishI just as soon hang up the phoneIf you wanna serve in a Muslim churchGo and take your ass back home

Also, the chorus is, "This is coming from real America, son/And pissed off rednecks like me".

All three of these statements are pure, unvarnished racism. The excuse for complaining about "press 1 for English" is that immigrants "should" learn English. But that argument assumes that learning a language is easy and takes no more than a couple of weeks, when in reality, it's a long process, especially for adults, to become conversant enough in a language to conduct personal business in it. Of course, the vast majority of people making this argument cannot speak a second language themselves, because they know full well it's fucking hard, showing that this argument is disingenuous and simply a cover for the belief that this country should be reserved for Anglos and should be formally racist against Latinos. Jones doesn't even hide this, singing, "They need to lock down on the borders." Don't think he's talking about Canada there.

As PZ Myers noted, the Muslim thing is especially egregious, since he was just complaining about mythical bans on his own children praying. So he's angry about religious oppression that isn't real on one hand, and calling for religious oppression on the other. Of course, as PZ points out, many to most Muslims who live here were born here, so this is "home" in every sense of the word.

I won't even start on the stupidity of people with German or Irish or English backgrounds saying that immigration to this particular geography is wrong.

But what is really telling is the casual way he equates "real Americans" with "rednecks". I'm not here to quarrel about whether the term is offensive. It's clearly being used as a source of pride here. But "redneck" is a very specific word and is used exclusively to mean rural, white Americans with what you might call an earthy sensibility. Which isn't in and of itself a bad thing---I often joke about how no matter how cosmopolitan I get, I still have some redneck habits of the cleaning-your-ears-with-keys variety---but it is offensive to posit that only those people are real Americans. Most obviously, it's an overtly racist claim. "Redneck" is understood explicitly as a word describing white people, and so he's clearly stating that in order to be a "real" American, you must, above all else, be white. Also, Christian, rural, conservative, and apparently dumb as a rock, but white is clearly the biggie.

Of course, the same people who eat this shit up get all sentimental about 9/11, which was an attack on two major metropolitan areas, New York City and D.C., so by their own reckoning, not a single "real" American was harmed. But while that's irritating, this tendency to define "American" so narrowly that people of color are excluded from it is downright poisonous. It justifies situations like the one in Ferguson, where a white-controlled government squeezes black residents for money through predatory policing, because so many of the white people involved see black people as interlopers. It's why there's so much squawking about affirmative action but complete silence when it comes to all the ways that white people are given special opportunities, such as with legacy admissions at universities. It's why Republicans are gung-ho on voter suppression, because a lot of them simply don't see black voters as legitimate voters in the first place.

And then there's this:

Conservative commentator Erick Erickson told talk-radio listeners Friday morning that his theory is that all of President Obama's policy decisions were "designed to humble the arrogant crackers" who run the United States.

"Barack Obama believes the United States of America is a destabilizing, arrogant force in the world. We need our comeuppance and we need to be humbled," Erickson said while guest-hosting "The Rush Limbaugh Show."

Erickson's rant comes straight from a belief that "Americans" are white and that Americans who aren't white, including the president, don't really count. I wish I could say that this rant was unique to him, but the belief that Obama's presidency is illegitimate---which is expressed most bluntly in the birth certificate obsession---is widespread amongst conservatives. It's all because of this "real Americans" attitude. The Democratic coalition, which is racially diverse and urban, is the exact opposite of the "rednecks" that are the only "real" Americans, in their view. Obama is doubly illegitimate in their eyes, as Erickson's rant makes clear, because of his race. It's silly and paranoid to think Obama's every waking hour is spent obsessing about "crackers"---that's the projection of a racist mind. But it is true that Obama's presidency represents threat to the belief that the "natural" owners of power are white. Which is the real concern here.