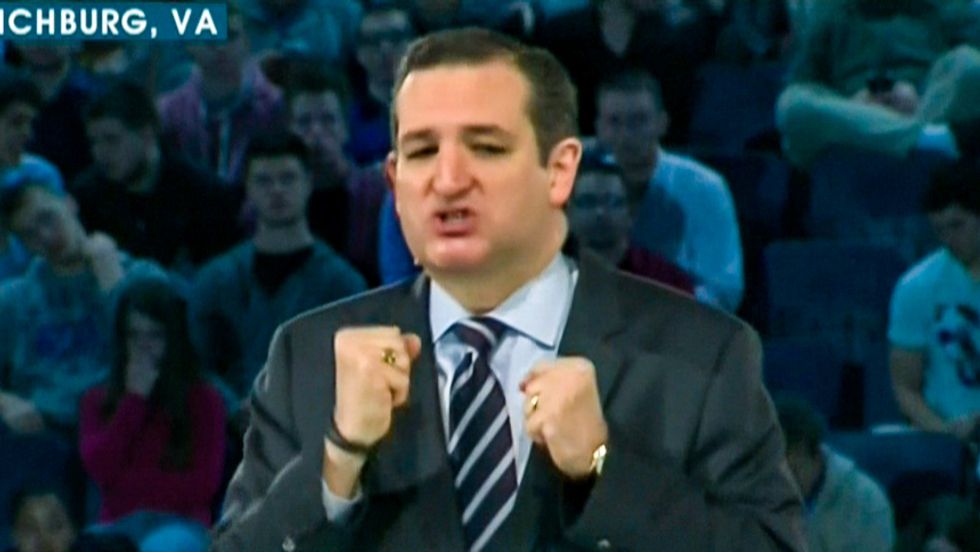 Sen. Ted Cruz (R-TX) suggested on Monday that his presidency would be like George Washington in the Revolutionary War, Franklin D. Roosevelt fighting World War II and Ronald Reagan defeating communism all rolled into one.

"These seem difficult," Cruz admitted. "Indeed to some, they may seem unimaginable. And yet, if you look in the history of our country -- imagine it's 1775 and you and I were sitting there in Richmond listening to Patrick Henry say, 'Give me liberty or give me death.' Imagine it's 1776 and we were watching the 54 signers of the Declaration of Independence stand together and pledge their lives, their fortunes and their sacred honor to igniting the promise of America."

"Imagine it was 1777 and we were watching General Washington as he lost battle after battle after battle in the freezing cold as his soldiers with no shoes were dying fighting for freedom against the most powerful army in the world," he continued. "That too seemed unimaginable. Imagine it's 1933 and we were listening to President Franklin Delano Roosevelt tell America at a time of crushing depression, at a time of a gathering storm abroad that we have nothing to fear but fear itself."

"Imagine it's 1979 and you and I were listening to Ronald Reagan and he was telling us that we would cut the top marginal tax rate from 70 percent all the way down to 28 percent, that we would go from crushing stagnation to booming economic growth to millions being lifted out of poverty and into prosperity and abundance."

Cruz also fondly recalled Reagan's foreign policy: "The very day that he was sworn in, our hostages who were languishing in Iran would be released. And that within a decade, we would win the cold war and tear the Berlin Wall to the ground."

According to the Texas Republican, all of those accomplishments seemed "unimaginable," but they happened because of the "grace of God."

"Compared to that, repealing Obamacare and abolishing the IRS ain't all that tough," Cruz opined. "I believe in you. I believe in the power of millions of courageous conservatives rising up to re-ignite the promise of America."

"And that is why, today, I'm announcing that I'm running for president of the United States."