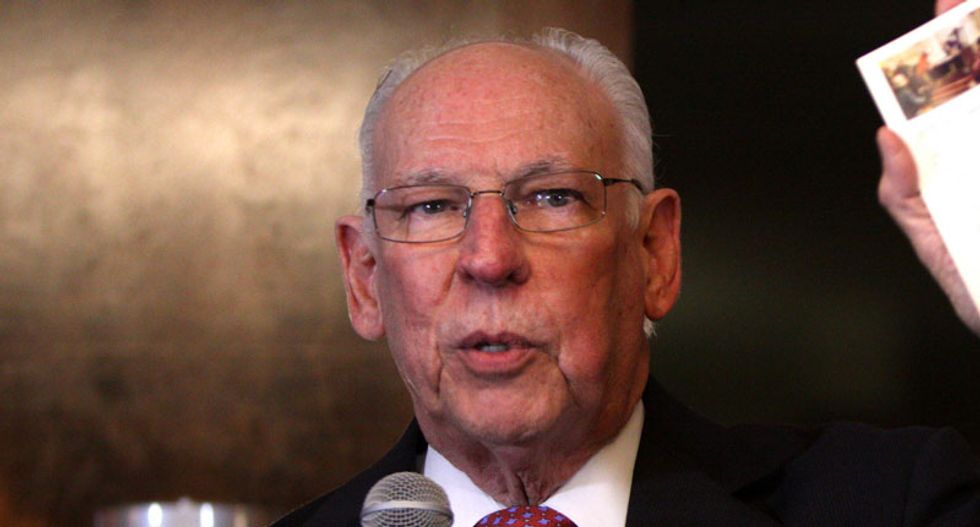 Rafael Cruz, the father of Texas Senator Ted Cruz (R), recently described a prayer rally that his son organized with Houston pastors as the work of God. The rally was held last year amid a legal battle over the city's new anti-discrimination ordinance.

In an interview with former Tea Party candidate Joe Miller published Monday, Cruz noted that the city of Houston passed an ordinance in 2014 to protect gays, lesbians and transgender people by prohibiting discrimination on the basis of sexual orientation or gender identity.

Or as Cruz explained it: "The mayor and the city council passed an ordinance that if a man -- if he just felt like a woman today, he had the right to walk into a women's bathroom. And if a woman in that bathroom objected, he could sue her for violating his civil rights. That's crazy. That is absolutely crazy."

Cruz warned that high school football teams would pretend to be transgender so they could harass or sexually assault women in the locker room.

Local pastors and Christian leaders launched a campaign to overturn the measure, and Houston ended up subpoenaing sermons from five pastors who opposed the anti-discrimination ordinance. "The pastors made their sermons relevant to the case by using the pulpit to do political organizing," said Janice Evans, chief policy officer to the mayor, in a statement.

"As a result of this, pastors began mobilizing, because they wanted to take things to a referendum," Cruz said. "Well, the mayor was not going to take this lying down... she demanded the sermons of all of those five pastors, and any email that referred to her or to the ordinance that she had passed."

"You know, when this happened, the very next day my son called his pastor -- and I'll tell you, this is just such an inspirational story because it shows you how God works in the affairs of man -- that same day, my son Ted called his pastor at First Baptist Church in Houston, and said, 'Pastor, I want to have a pastor's rally tomorrow at eleven o'clock, I would like to have it at our church to fight this outrageous position by this mayor.'"

"And the pastor begins to laugh on the other side of the phone," Cruz said. "And my son says, 'Why are you laughing?' He says, 'You know, Ted, about three months ago about 50 pastors, we decided that we wanted to get together and pray for America, and pray for our city, and pray for our state, and we have that prayer meeting scheduled for tomorrow at ten o'clock in my office."

"That was just the hand of God," Cruz remarked. "So Ted went to his office with those 50 pastors. They all got on their knees and prayed for an hour, and then they went down to the sanctuary and held this rally at eleven o'clock. By that time, about 400 other people had gathered in the sanctuary. And all 50 of those pastors said if we are asked for our sermons we will not comply. The city has no right to violate our religious rights."

"More and more pastors are going to have to take a stand," he concluded. "If you're going to put me in jail, put me in jail. But I am not going to prostitute my religious freedom. And you know what? The mayor backed down."