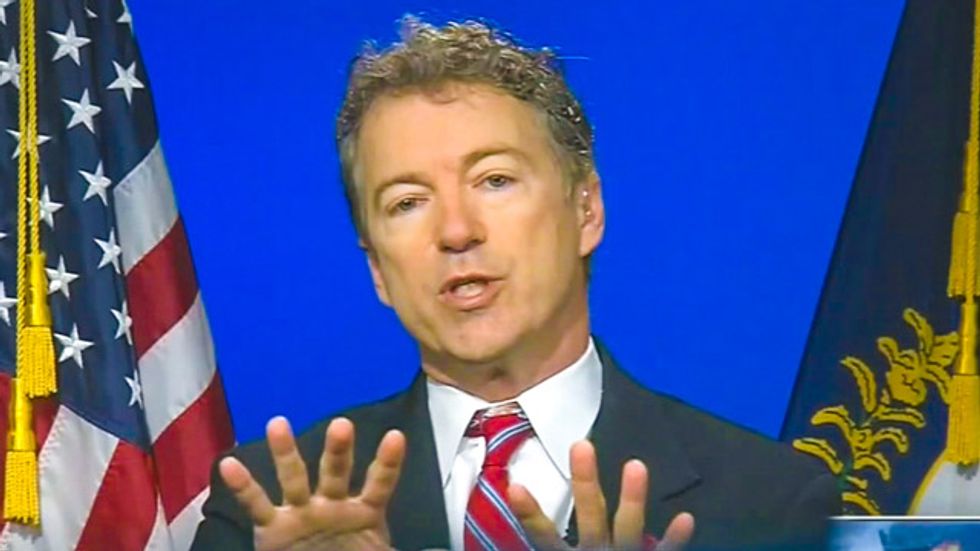 In a video clip carried by the Christian Broadcasting Network, potential 2016 GOP presidential nominee and Kentucky Senator Rand Paul (R) took up what he called the "moral crisis' afflicting the country, suggesting that the U.S. needs a series of "tent revivals" to get back on the proper path.

In the video, uploaded by Right Wing Watch, Paul dismissed the idea of the federal government's involvement in the same-sex marriage debate, saying, "Don't look to Washington to solve anything."

"The moral crisis we have in our country -- there is a role for us trying to figure out things like marriage -- there's also a moral crisis that allows people to think there would be some other sort of marriage, " he explained. "I think the exhortation to try and change people's thoughts has to come from the countryside."

The libertarian lawmaker then took a slightly religious turn, saying "You know, I've said this before, we need a revival in the country."

"We need another great awakening with tent revivals of thousands of people saying, you know,'reform or see what's going to happen if we don't reform'."

In a recent interview with Brett Baier of Fox News, Paul admitted that the use of the term ‘marriage’ for same sex couples offends him.

The Supreme Court is expected to rule on same sex marriage in June.

Watch the video below uploaded to YouTube by Right Wing Watch: