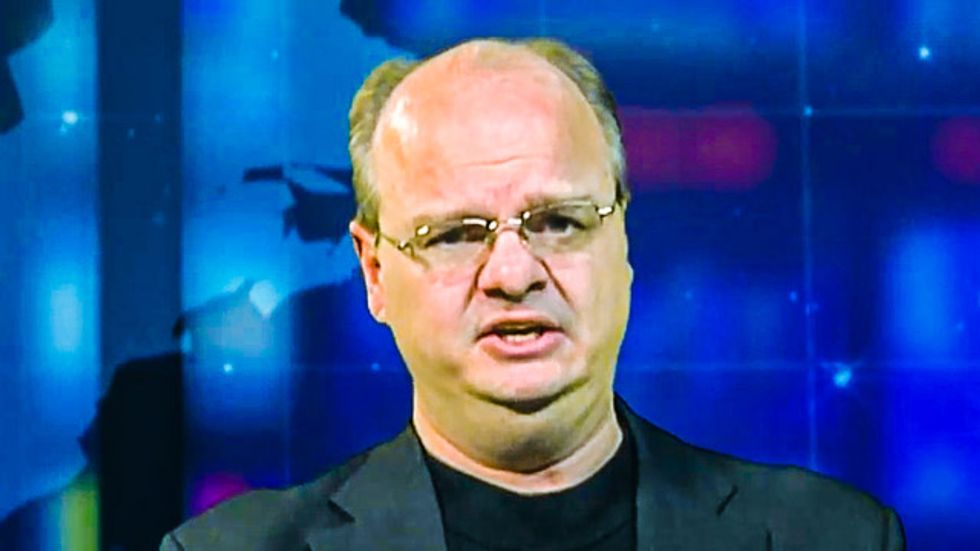 Colorado Republicans are fleeing from a pastor-turned-lawmaker who wondered whether a pregnant woman’s brutal attack was God’s punishment for legal abortion.

State Rep. Gordon Klingenschmitt (R-Colorado Springs), a demon-obsessed former Navy chaplain, suggested Wednesday on his “Pray In Jesus Name” program that the 26-year-old woman was stabbed and her baby removed from her womb as part of a biblical curse.

"This is the curse of God upon America for our sin of not protecting innocent children in the womb and part of that curse for our rebellion against God as a nation is that our pregnant women are ripped open," Klingenschmitt said, citing a passage from the Book of Hosea.

Other House members from both parties said they were appalled by the remarks, which were first reported by Right Wing Watch.

"Gordon does not speak for his caucus," said Rep. Polly Lawrence, the House assistant minority leader.

"He does not represent the Colorado Republican Party," said Steve House, chairman of the state GOP, although he pointed out that Klingenschmitt had a First Amendment right express his beliefs.

"It's disgusting. I thought Gordon Klingenschmitt would be our next Todd Akin," Carno said. "I didn't know he would be our next Westboro Baptist Church. This poor woman gets her baby cut out of her belly and he uses this tragedy to drive traffic to his ministry."

Klingenschmitt has responded to the controversy by saying his nonprofit charity had donated $1,000 to the victim’s family, and he challenged other lawmakers to donate at least $5 each.

Michelle Wilkins survived the attack, but her 34-week-old child did not.

Dynel Lane, who authorities say lured Wilkins to her home with a Craigslist post advertising baby clothes for sale, will not face a murder charge in the baby's death, although hospital staff say she could have been viable outside the womb.

Klingenschmitt urged lawmakers to pass a law that would allow prosecutors to file charges when unborn babies are injured or killed.

Waller, the former lawmaker, and the executive director of Colorado Citizens for Life said they each support such a law, but both distanced themselves from Klingenschmitt.

"God did not will for this horrific tragedy to happen," said Sarah Zagorski, who leads the anti-abortion group. "Sadly, Rep. Klingenschmitt's comments take away from the seriousness of this tragedy and the aftermath Michelle and her family are facing."

However, not everyone backed away from Klingenschmitt.

Kevin Swanson, a Colorado-based radio host who believes Disney's "Frozen" teaches young girls to be lesbians, said God "may have somehow directed this irony to teach Colorado a lesson.”

Klingenschmitt refused to apologize for his remarks Friday during a radio interview, saying "if other people are offended by the Bible, that's okay, they don't have to agree with me or come to my church or watch my TV show. It's a free country."

Update: Swanson's remarks were added to the story after it was originally published. Additional updates made to show the victim's family rejected Klingenschmitt's donation and that the lawmaker refused to apologize for his comments.