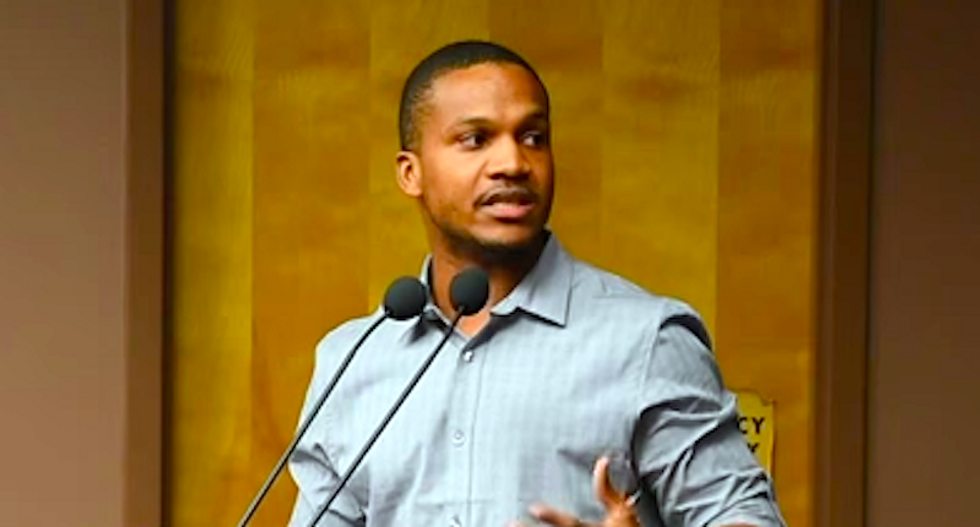 A San Diego man with no criminal record is facing a possible life term in prison for flashing gang signs in some Facebook photos.

Aaron Harvey and 14 other men, including the rapper Tiny Doo, were charged under an obscure California law accusing them of conspiring with gang members who shot nine people in 2013 and early 2014.

Harvey and the rapper, whose real name is Brandon Duncan, are not directly tied to the shootings, but prosecutors are employing a 2000 conspiracy law that allows prosecution of gang members if they benefit from crimes by other gang members.

Prosecutors say Duncan’s music sales were boosted by the shootings, but Harvey’s alleged gains are not easily quantified.

“They’re saying I benefited because my stature, my respect, went up,” Harvey said. “I didn’t even know I had any stature. I don’t understand how someone can benefit from something they don’t even know exists.”

Superior Court Judge David McGill recently dismissed charges against some of the defendants in the case, finding that prosecutors failed to prove the men willfully benefited from the shootings.

Attorneys for Harvey and Duncan will ask the judge to dismiss their charges in a hearing set for March 16, and about 75 people rallied Friday before a court hearing the case at San Diego County Courthouse.

“If the district attorney wins this case, and I am convicted of crimes I didn’t commit or have any knowledge of, not only will my life change forever, but so may the lives of every young person who had been wrongly documented as a member of a gang,” Harvey said.

Harvey was entered into the state’s CALGANG database at some point during one of the 50 times he says he was stopped by police, although he's never been convicted of a crime.

Much of the evidence tying Harvey to the Lincoln Park gang came from social media, such as Facebook posts showing him making hand gestures associated with the gang or photos of him alongside other gang members from his neighborhood.

“It’s not a guessing game -- they’ve made it as obvious as they possibly could,” said Dana Greisen, head of the district attorney’s gang prosecution unit. “The social media stuff is in our face, in their rivals’ faces in no uncertain terms.”

“This is as draconian a conspiracy law as you’ll see anywhere in the United States,” said Robert Weisberg, a professor at Stanford Law School.

Harvey, who moved to Las Vegas in 2013 and worked as a club promoter while studying to become a Realtor, is set to stand trial April 20 if his charges aren’t dismissed.

“This is not the American justice system,” said his lawyer, Edward Kinsey. “We attach personal liability to things. You’re not guilty by mere association or mere membership -- it’s just wrong. If they can get away with this, I fear for our future as free citizens.”

Watch Harvey discuss his interactions with police in this video posted online by Nadin Abbott, editor of Reporting San Diego: