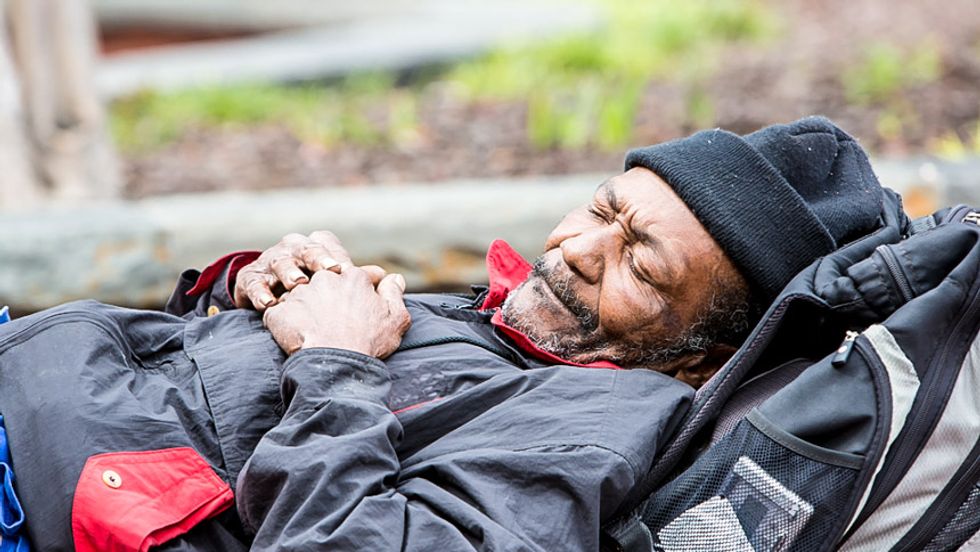 A San Francisco Catholic church has reportedly installed a "watering system" that discourages homeless people by drenching them as they sleep.

KCBS reported that the "no trespassing" signs outside the primary church for Archdiocese of San Francisco, Saint Mary’s Cathedral, did not mention what would happen to the homeless who tried to sleep under the cover of the building's doorway.

At random times throughout the night, "[w]ater pours from a hole in the ceiling, about 30 feet above, drenching the alcove and anyone in it," the station noted. "The shower ran for about 75 seconds, every 30 to 60 minutes while we were there, starting before sunset, simultaneously in all four doorways. KCBS witnessed it soak homeless people, and their belongings."

A homeless person named Robert told KCBS that people continued to risk their own health by sleeping under the shower.

“We’re going to be wet there all night, so hypothermia, cold, all that other stuff could set in. Keeping the church clean, but it could make people sick,” Robert explained.

A neighbor pointed out to KCBS that the watering system was not only an "inhuman" way to treat people, it also was a waste of water during a serious drought.

Cathedral staff confirmed that the system had been in place for about a year, and that it was intended to discourage homeless people from seeking shelter in the church's doorway.

“We do the best we can, and supporting the dignity of each person," Archdiocese spokesperson Chris Lyford said. "But there is only so much you can do.”