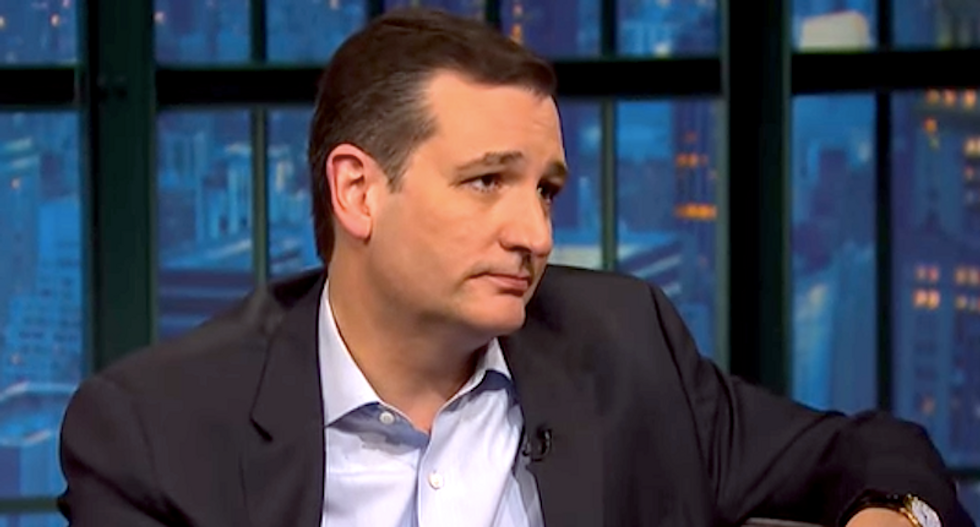 Talk show host Seth Meyers mocked Sen. Ted Cruz (R-TX) to his face about scaring a little girl on the campaign trail and his retrograde views on science during an appearance Tuesday on “Late Night.”

Cruz said media accounts of his exchange with a 3-year-old New Hampshire girl made him out to be horror movie villain Freddy Kruger, but he said the child was not terrified when he told her the world was “on fire.”

The woman told her daughter that Cruz was “going to put out the fire,” the senator said, and she said the girl asked if the senator was a fireman.

“I think the important lesson here is that kids are just terrible with metaphors,” Meyers said.

The comedian and talk show host then mocked Cruz for his views on climate change, saying he initially misunderstood the senator's remarks to the child.

“First, I got excited, because I thought maybe you were coming around on global warming, but that’s not the case, right?” Meyers said. “Because I think the world’s on fire, literally -- hottest year on record -- but you’re not there, right?”

Cruz was ready with a quick comeback.

“It’s interesting that you say that, as I just came back from New Hampshire, where there’s snow and ice everywhere,” the senator said.

He said the debate on climate change should follow science and data – which he said did not support the scientific consensus.

“Satellite data demonstrate for the last 17 years there’s been zero warming – none whatsoever,” Cruz said. “It’s why, remember how it used to be called global warming? And then magically the theory changed to climate change? The reason is, it wasn’t warming, but the computer models still say it is, except the satellites show it’s not.”

“So you trust satellites more than computers?” Meyers said. “Because I have ‘Direct TV,’ and I’d rather watch on my computer.”

Cruz discussed his reading of the Dr. Suess book, “Green Eggs and Ham,” during his symbolic filibuster to “stop Obamacare.”

“How’d that go?” Meyers deadpanned, as the audience cheered.

Cruz said his efforts “went fabulously,” citing unfavorable polling data for the Affordable Care Act, which he said led to the Democrats losing the Senate in 2014 and would lead to further Republican gains in 2016.

Meyers then asked him why he continued to fight same-sex marriage, when polls shows a growing majority of Americans favor the legal recognition of such unions.

“Listen, I’m a constitutionalist,” Cruz said. “For over 200 years, marriage has been a question for the states. Now personally, I believe in traditional marriage between one man and one woman. But if you want to change the marriage laws, the way to do it constitutionally is to convince your fellow citizens, go to the state legislature, and change it. It shouldn’t be the federal government or unelected judges imposing their own definition of marriage. We should, instead, respect our constitutional system.”

“You know, I read the constitution this morning,” Meyers said, “and I don’t know if you’re right on all that stuff.”

Watch portions of the interview posted online by Late Night With Seth Meyers: