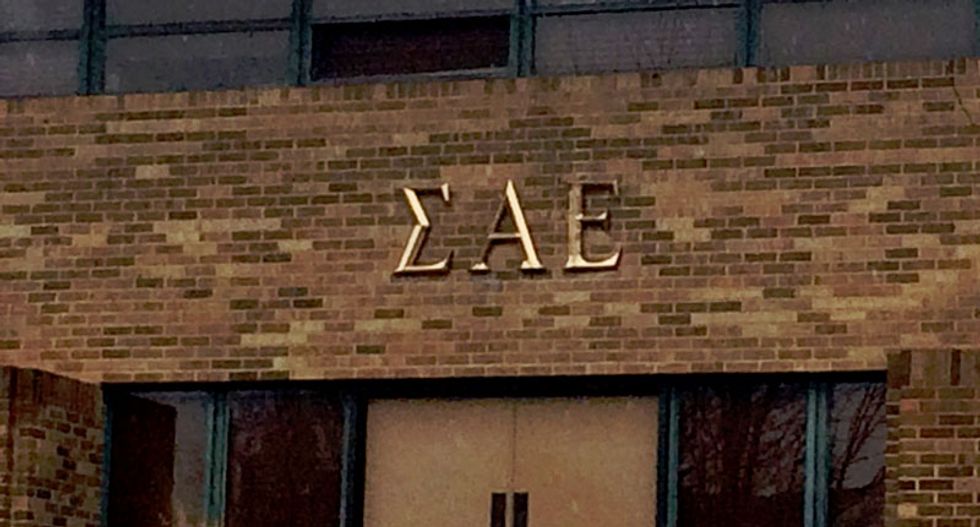 The Sigma Alpha Epsilon fraternity is seen at the University of Oklahoma in Norman, Oklahoma, March 9, 2015. REUTERS/Heide Brandes

The fraternity whose members were videotaped singing a racist chant pledged on Wednesday to root out discrimination and try to diversify membership in its hundreds of chapters across the country.

Sigma Alpha Epsilon, which has 15,000 undergraduate members in 237 chapters, will appoint a diversity director and establish a hotline for members and non-members to report unacceptable behavior.

It will take seriously every complaint made to the hotline and investigate and take swift action when heeded. All members will go through diversity training developed by an outside consultant, as well, Executive Blaine Ayers said at a news conference in Chicago.

"We are taking steps to insure that this will never happen again," said Ayers, who expressed embarrassment and disgust over the chant.

The national fraternity is investigating all of its chapters after the release of a 10-second video showing members at the University of Oklahoma on a date night chanting in unison, using offensive language referring to black people and vowing never to admit them to the fraternity.

"We are focused on trying to determine the root of this song or this chant, where it came from, and that's our primary focus. Unfortunately it's been difficult to get some of that communication because the young men have spread... But we are doing our best to get to the bottom of it," Ayers said.

The 163 members at the University of Oklahoma were suspended and will now go through a trial process within the fraternity. They could receive penalties such as suspension until they graduate, or permanent expulsion from the organization, Ayers said.

Ayers did not say whether the fraternity has found out who taught the chant and whether it was commonly sung by other chapters. The fraternity is currently investigating two other chapters for possibly inappropriate behavior on social media, but it was different from the song, he said.

Two students who were seen leading the chant on the video were expelled from the University of Oklahoma and the fraternity house was shut down. No other university has closed its SAE chapter, Ayers said.

Minority membership in the fraternity - which has 200,000 alumni members - is roughly 20 percent, Ayers said. African-American membership is roughly 3 percent.