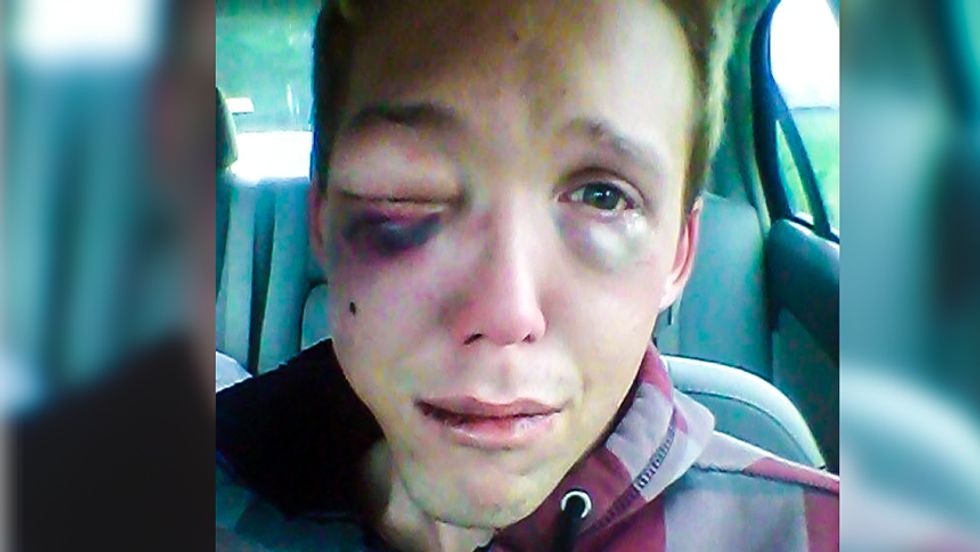 Devin Norman was beaten at a Mississippi Walmart (Facebook)

A social media campaign has urged the District Attorney in Corinth to investigate a possible hate crime after a gay man was brutally beaten at a Mississippi Walmart.

According to Norman, Scott beat him because of his sexual orientation. Reports said that Scott had called him a "faggot" during the incident.

"I think that it's a travesty that there's an entire segment of abuse that's just swept under the rug," Norman explained. "Yes, his assault was aggravated but it's entirely something else. Entirely. It was simply because of who I love."

Sources close to Norman told WMC that he had threatened to "out" Scott with private text messages and photos that the two men had shared with each other.

But Norman insisted that he no longer had the photos.

"I was bluffing, hoping that he would back away from me because his body language was so threatening, and violence scares me," he recalled.

Scott was charged with simple assault. Police later said that the charges would be upgraded to aggravated assault on Monday.

Norman has called on police to charge Scott with a hate crime, but officials indicated that they did not think that the evidence supported that charge.

A social media campaign launched on Sunday asked people to contact District Attorney Trent Kelly to urge him to pursue hate crime charges. And a petition on the White House website asked the president to "force" the DA to classify the attack as a hate crime.

"This story is heartbreaking in its absolute stupidity, and because I know there are echos of my own past in it," one Reddit user noted. "I've seen this kind of hate before. I was perceived as being weird, and I often received taunts of 'faggot,' and "n*ggerlover," because I had black friends and stood up against racism, and dared to care about recycling."

IfYouOnlyNews.com pointed out that Mississippi had no law protecting LGBT people against hate crimes. But Scott could be charged under federal hate crime laws.