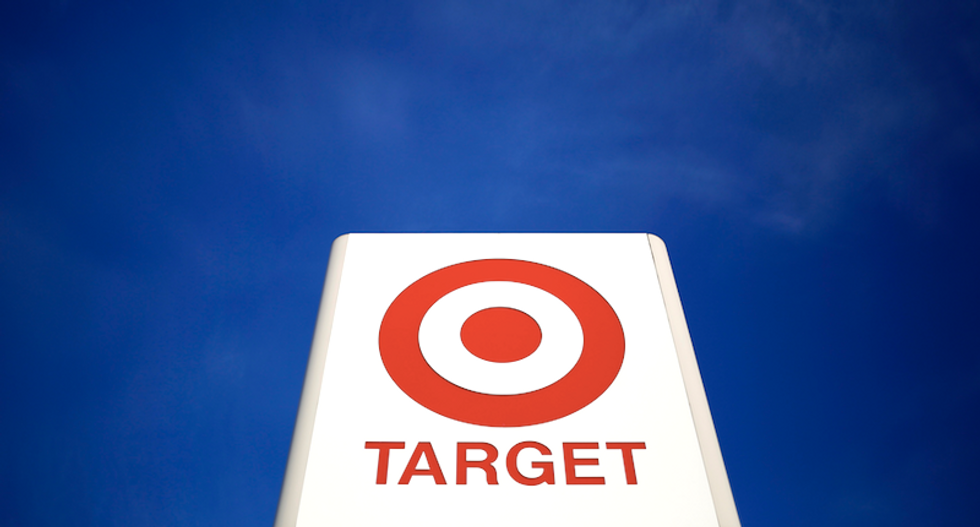 A sign for a Target store is seen in the Chicago suburb of Evanston, Illinois, in this file photo taken February 10, 2015. (REUTERS/Jim Young/Files)

The non-profit advocacy group launched its campaign on Tuesday. With a budget of just $5,000 it purchased online ads that appear on the browsers of people surfing the Web within an approximately 1,000-feet radius of three stores in Minnesota, Pennsylvania and Nebraska.

The approach highlights the growing use of social media and the Internet to pinpoint grass-roots campaigns, labor experts said. It is also likely the first time that Wal-Mart, which announced its pay hike last month, has been used as leverage to pressure another retailer since campaigns to boost worker pay across the service sector started to gain traction in the United States three years ago.

"There is a lot of experimentation going on," said Kent Wong, director of the UCLA Labor Center. "Sometimes these very small-scale, very creative campaigns can catch on. Sometimes they don't. It's hard to predict."

UltraViolet purchased a few weeks worth of banner ads through Google, Microsoft and other networks. For $5,000 it was told the ads, which say "Did you know there's a Walmart near you that pays higher minimum wage than Target?", could be viewed half a million times, organizing director Karin Roland said.

"We can have a lot of impact for a little bit of money," Roland said, noting that a related online petition had attracted 25,000 signatures. "As far as we are concerned that's a starting place. If we see a strategic need to expand it, we will."

Target has declined to comment on the UltraViolet campaign but has said it is committed to paying market-competitive wages to retain the best employees. It does not disclose its average wages. Data from employer review site Glassdoor shows cashiers at Target and Wal-Mart both average about $9 an hour.

Shoppers at the three Target stores will see the ads if they are surfing Websites in the ad networks of Google and others - for example, if a shopper checks out a camera review site while shopping for a digital camera, Roland said. UltraViolet also purchased local ads on Facebook, she said.

It is unclear whether the efforts will bear fruit. While the labor group OUR Walmart successfully used social media and other means to organize nationwide protests, UltraViolet lacks the financial backing of a union and is untested in a wage campaign.

Rand Wilson, a veteran labor organizer and a communication and policy director at a Massachusetts chapter of the Services Employees International Union, said he is a frequent buyer of Facebook ads to advance local campaigns but cautioned that the Internet alone can only get you so far.

"Engagement on the Internet is not very deep. There is a superficiality to it. It isn't a substitute for the hard shoe-leather grass-roots work you got to do."

(Reporting by Nathan Layne in Chicago; Editing by Ken Wills)