Ted Cruz probably doesn't listen to any music, except humming tunelessly to himself 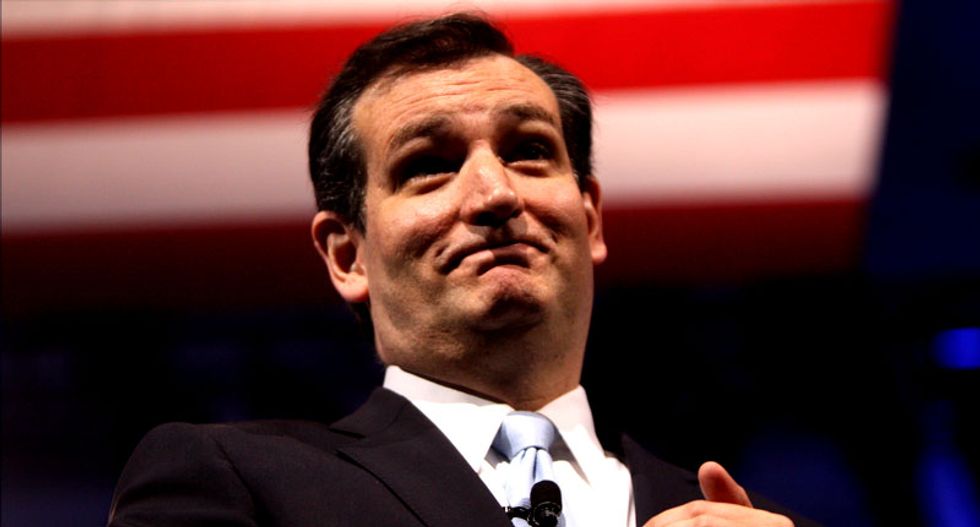 If you want to know exactly what kind of lizard Ted Cruz is, this particular quote will tell you all you need to know. "“My music taste changed on 9/11,” he told CBS. "“I actually intellectually find this very curious, but on 9/11, I didn’t like how rock music responded. And country music, collectively, the way they responded, it resonated with me.”

From this quote, we learn a couple of things. First, Ted Cruz does not listen to music, any kind of music. People who listen to music don't talk about music this way. Not that political expression can't influence the way you feel about music, but it's not the end-all, be-all. Most importantly, the word is feel. Music is an art form, even in its most pop-centric and base forms. Cruz talks about it like it's comparing worksheets listening the policy stances of two candidates. There is no sense of feeling or even acknowledgement that things like "pleasure" or "emotion", much less nuance or complexity, is involved. It's just a checkbox of ideological rigidity.

Second of all, we learn from this that Cruz probably conceived his children by ejaculating joylessly into a cup and handing it over to his wife and, when she blanched, saying, "Do you want to be the First Lady or not? Don't worry. We only have to make two. Just enough for the photos."

I agree with Digby:

This whole thing is silly, obviously. Ted Cruz’s musical tastes are only interesting to the extent they make him seem like a regular guy. But come on — nobody changes what music they like for political reasons. That pandering comment is so awkward and calculated it makes him sound like an automaton.  In fact, it’s very hard to believe that Ted Cruz has any interest in music at all. The image that comes to mind when you see him isn’t some guy rocking out to the Stones or singing along to “The Angry American.” It’s Richard Nixon walking on the beach in his black socks and wing tips.

Exactly. His statement was so clearly crafted to hit some marks, mostly to reassure red state voters that he's an ordinary guy, just like them, even though he went to Princeton. Same reason he dresses like he just grabbed the first things off the racks at JC Penny's without even checking the sizes, much less trying them on. Most politicians show some calculation, but with Ted Cruz, you get the strong impression that calculation is all there is to him.

Digby makes another important point that cinches it: If Ted Cruz actually turned on country radio like he claims he does, he would know that it's completely dominated these days by songs by bro types singing about getting drunk and screwing voiceless women in cutoff shorts. Why it's taken a turn for that is worth an essay of its own, but I'd argue that it's basically party music for backwards white guys who want a  piece of the EDM/R&B/hip-hop scene, but without all its urbanity, racial diversity, and female voices. So it's certainly a reactionary music, but it's not, as Digby notes, particularly "family values" or "Christian". So when Ted Cruz says he listens to "country", he's not really saying he listens to country or any kind of music. "Country music" is an abstraction that doesn't really exist: A hypothetical music full of waving flags and Christian values and apple pie. It's an image that has influenced actual country music but doesn't actually describe country music, which is a diverse and ever-changing genre, like most are.

But it's interesting. Most politicians do try to carefully reveal what they like in a way that is politically pleasing, but they do have their own tastes. I do believe that Marco Rubio listens to 90s rap, as a frat daddy about his age would. I definitely believe that Barack Obama listens to popular hip-hop, since he really does seem more "normal person" than most politicians. I absolutely believe that the Clintons like middle of the road classic rock like Fleetwood Mac. But I bet Ted Cruz probably couldn't name a single country artist he supposedly likes without having an aide give him a list.