Ted Cruz reminds us why knock-offs suck, with his wannabe conservative Obama act 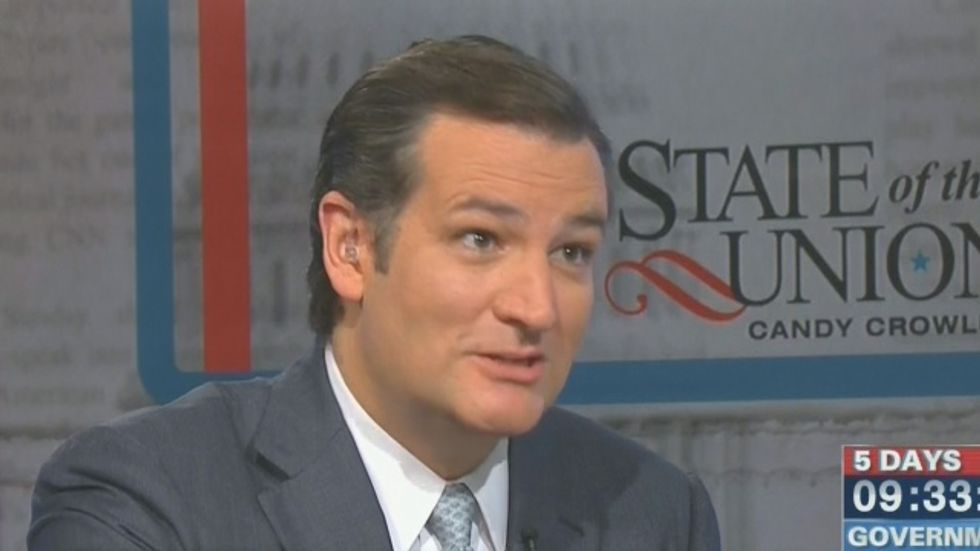 I guess that the right wing nuts are really going to show us? One of the casual gotchas that liberals have been tossing at conservatives in light of Ted Cruz's bizarro rise to fame is to point out that Cruz, unlike President Obama, actually was born out of the country and to ask if that means conservatives are going to be consistent with the birther bullshit. One would have thought not, but already it's happening. Donald Trump is going full birther on Ted Cruz. Greg Gutfeld, who is at the top of the list of men who have long mistaken women's polite laughter as evidence that he is actually funny, is already going birther ironic. This could get bad.

In a way, it makes sense. Cruz has long positioned himself as the conservative version of Barack Obama. God knows that conservatives love a knock-off, always making jealous eyes at liberals, scientists, and others who are smarter or cooler than they are, and trying to create their own versions to show that they are just as good. Thus we get everything from "Christian rock" to "intelligent design" to whatever they're calling "conservative Woodstock" this week. So it was bound to happen that their green eyes would fall upon Obama and the way that his 2008 campaign inspired genuine enthusiasm and outright hero worship amongst supporters. And so they wanted an "Obama" of their own.

But like most knock-offs, Cruz may have the form but not the essence. On paper, you can see why conservatives might feel he's the Republican Obama: The child of non-white immigrant father and a white American mother, an impressive academic resume, a youthful family complete with two cute daughters, and a clear plan to skyrocket from being a one-term Senator to the White House. But like a Christian rock song that has the right structure but is lacking any semblance of the grit or soul that sells real rock music, Cruz may hit some of the biographical marks of Obama but he's utterly lacking Obama's charm. Instead, his announcement that he's running for president is making people cringe, because they are not looking forward to many months of wondering how he seems to always be on the verge of ejaculating.

Either way, the constant crinkle face is quadruply annoying because it just reconfirms that Cruz is a major league asshole. As Josh Marshall writes:

Second, no one wins the presidency who does not come off as a good guy, someone you would like, to a majority of the population. The one possible exception is Richard Nixon, though a significant part of his 1968 success was combating this problem. Lots of people hated Clinton and Bush and now Obama too. But most people liked them. Likable guys, not, in a word, assholes. People who come off like assholes don't get elected president. From college and law school to the Senate and seemingly everywhere in between, Cruz has found small groups of admirers while convincing the vast majority of people as a consummate asshole.

This isn't just me sounding off; it's not trash talk. This is a really basic dynamic of presidential elections. There were plenty of Democrats who thought W was an entitled jerk. Most of the population did not feel that way. Many republicans felt Clinton was a slippery charlatan. But even many of them found it difficult to resist his charm. Indeed, that was one of the reasons they hated him.

Most people, including most Republicans, find Ted Cruz grating, divisive and arrogant. That makes it extremely hard to make the kind of emotive connection with voters who come to elections without strong ideological moorings.

Ding ding ding! I think there was initial enthusiasm amongst the Republican ranks when Cruz first came to light because they saw his biographical details and thought they had finally found an Obama of their own. Then they listened to the guy talk. And let's be clear: If Republicans think you come across as an asshole, then you must be a complete shitstain. These are people who think that Mike Huckabee is "charming", even though people with common look at Huckabee and think, "Don't leave him alone with any teenage girls." So the bar is super low and Cruz still can't clear it.

Not that Cruz doesn't present a danger. As Scott Lemieux at the LA Times writes, "Cruz is a long shot to win the nomination, but he is a canny politician with enough of a base of support to act as an ideological enforcer during the primaries. And one of the most important orthodoxies he will be policing is total, uncompromising opposition to what will invariably be referred to as 'Obamacare.'" In other words, by being his cryface/cumface asshole self, Cruz is going to make it impossible for other Republican candidates to quietly start letting Obamacare go to focus on the future, and in doing so, he will completely change the shape of the 2016 election. This is probably why you're going to see more birther "jokes", because Republicans really want him to go the fuck away.