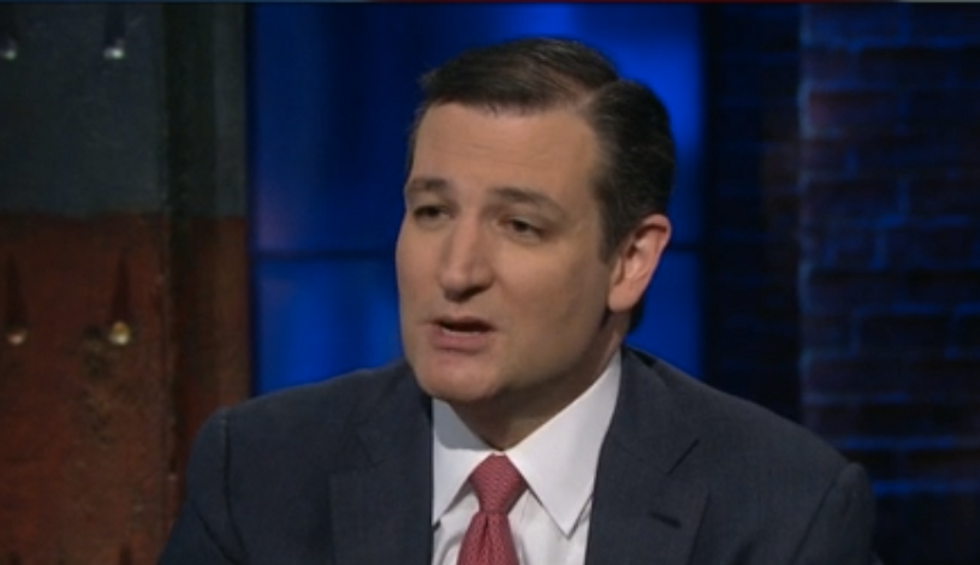 Tea Party favorite and freshly-declared presidential candidate Sen. Ted Cruz (R) had a choice whether to enroll his family for health coverage under the Affordable Care Act (ACA) -- also known as "Obamacare" -- even though he insists that it was required by law.

Igor Volsky at Think Progress pointed out that while Cruz claims that he was forced under the provisions of the ACA to sign up when his wife left her Goldman-Sachs job, he actually could have pursued any number of non-ACA options, but would have to go without the government's contribution to his premiums.

The day after he entered the presidential race and vowed to repeal "every word of Obamacare," Cruz told the Des Moines Register that his family would be forced under a provision of the ACA to purchase his family's health coverage through the District of Columbia's health care exchange.

An official summary of that provision of the ACA says that "(n)othing in the final rule or the law prevents a Member of Congress or designated congressional staff from declining a Government contribution for him or herself by choosing a different option for their health insurance coverage.”

In other words, under Obamacare, Ted Cruz can insure his family any way he likes, but if he wants the government to shoulder part of the burden, he will have to use the exchanges.

Larry Levitt, Senior Vice President at the Kaiser Family Foundation, told Think Progress that Cruz could purchase COBRA coverage through Goldman-Sachs, although the family would then take up the extra cost associated with losing the firm's employer contribution. Cruz could also could potentially purchase insurance through his presidential campaign, although again, without an employer contribution, coverage could be prohibitively expensive.

When CNN asked Cruz about his decision to sign up for Obamacare, the senator countered that he obeys the laws, unlike the current chief executive.

"I believe we should follow the text of every law, even laws I disagree with," Cruz said. "It's one of the real differences -- if you look at President Obama and the lawlessness, if he disagrees with a law he simply refuses to follow it or claims the authority to unilaterally change."

The lawmaker's office has changed tacks a few times since the news about Cruz signing up for the ACA broke earlier this week. Currently, a Cruz spokesman is claiming that the senator will forego the government subsidy he would receive under the ACA and pay it himself.