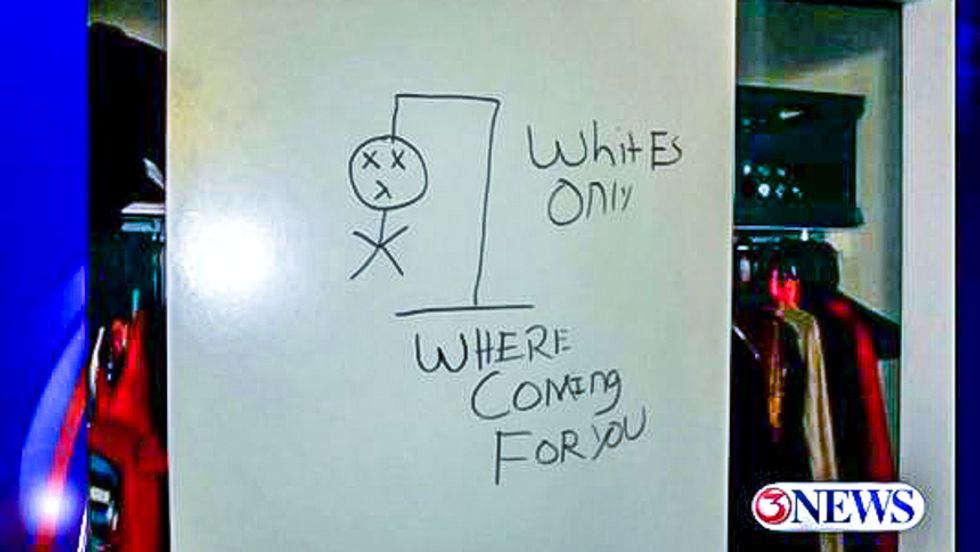 Law enforcement officials said this week that a black student at Texas A&M Corpus Christi had been terrorized when someone broke into her apartment and scrawled racist slurs and lynching threats on her walls.

At a news conference on Monday, Corpus Christi Police Chief Floyd Simpson said that he wanted to speak out about the case because of a trend of racism at other universities throughout the country.

Photos obtained by KRIS-TV showed writings on the woman's walls that included images of a noose and the words, "Let's hang a n****r."

"White Power. We're coming for you," one message read. Another said, "Die n****r. Where is your protector? White Power."

The gated Islander Village apartment complex reportedly had video cameras, but police said that it was not immediately clear when the break-in occurred because the student had been away for spring break.

"I think the community ought to be hurt by this. I think that we all ought to take it very seriously," Simpson noted.

Officials speculated that other students were not responsible for the break-in, which included bad grammar and misspelled words.

Police indicated that they had several suspects, but anyone with information was encouraged to come forward.

"Quite frankly, we think we have a bead on some people who may be involved in this," the police chief explained. "The best thing they can do is come forward, and have a discussion about this, and let us bring this to a logical conclusion."

Possible charges for the crime included burglary, criminal mischief, and making terroristic threats, according to KRIS-TV.

The victim in the case was relocated to another apartment for her own safety.